At RTD, we’re committed to providing our customers the best transit experience. As we’ve expanded our bus, rail, and specialty services, we’ve identified the need to review our current pass programs. We will evaluate and identify challenges with our pass programs over the next year and determine the best programs to meet our customers’ needs.

The 25-member working group, which convened in March 2017 to evaluate RTD’s pass programs, completed its yearlong effort in February with a recommendation that will be reviewed by RTD staff and considered for approval by the agency’s board of directors. With board approval, the earliest the public could experience any change resulting from the group’s recommendation would be early 2019.

Individuals involved in the pass program study included members of RTD staff and external stakeholders representing schools, businesses, municipalities, neighborhood groups, and advocacy organizations. The group was asked to determine whether changes should be made to RTD’s pass programs, ultimately addressing the question of whether RTD is offering the public the passes they want and need and pricing them appropriately. It formulated several options, all of which were modeled by a consultant for their impact on total fare revenue and ridership.

Elements of the group’s recommendation include:

The working group has no inherent authority to make changes to pass programs. RTD staff this year will conduct an extensive review of the group’s recommendation and provide periodic updates to the board. Public meetings explaining changes that could result from the recommendation will take place later this year, and the details of those meetings will be posted on this webpage once they are scheduled. A board decision could take place later this year.

The purpose of the study is to evaluate RTD’s existing pass programs, including equity and underlying policies, and recommend whether new pass programs are needed.

Passes and products being evaluated include: 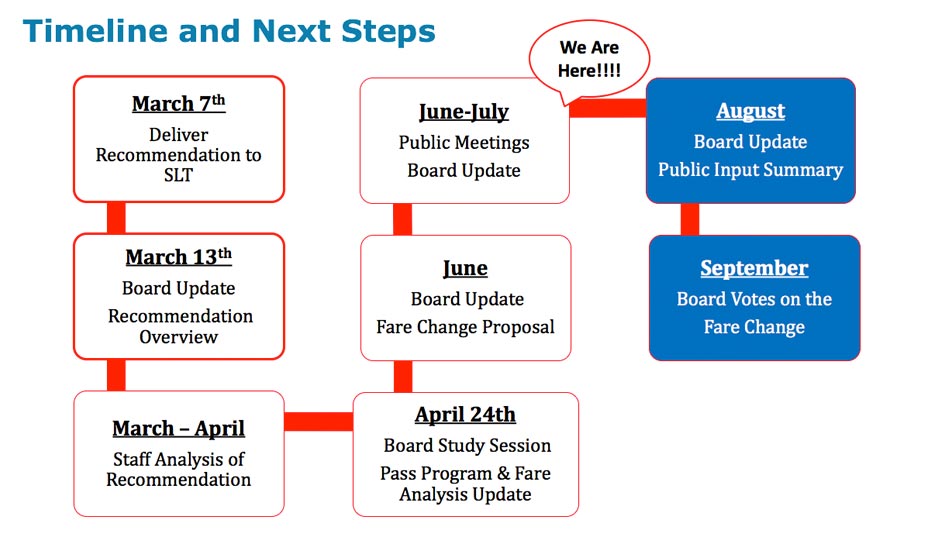 RTD for years had received requests from constituents, stakeholders, and others for passes different than or in addition to those currently offered. Requests from the public for a thorough review intensified during RTD’s last fare study, in 2014, and the RTD board of directors in 2015 authorized that it take place. Throughout this study, the agency worked alongside public representatives to answer complex and impactful questions about how best to serve its customers and the broader public.

RTD reviews its fares periodically and determines whether to make adjustments to them. That public process – related to but separate from the pass program study – is to take place later this year, with any potential changes to fares taking place in 2019. The modeling assumptions from the working group’s recommended option assume 2019 cash fares of $3 for a local trip, $5.25 for a regional trip and $10.50 for all trips that start or end at Denver International Airport. These specific fares are not being considered by the board at this time. As is the case with the pass program study, any fare changes would first be reviewed by the agency’s senior leadership team, then approved by its board of directors.

After a full year of meetings, the 25-member working group completed its deliberations in February 2018. It drafted a consensus recommendation that will be reviewed by the agency’s senior leadership team, then considered for approval by the agency’s board of directors.

The working group’s recommendation will be reviewed by two different groups within RTD: the agency’s senior leadership team and the board of directors. The working group itself has no inherent authority to make changes to RTD fares and pass programs.

That decision lies with RTD’s board of directors, which is expected to review the recommendation and other fare changes this spring and summer. With board approval, the earliest the public could experience any change resulting from the group’s recommendation would be early 2019.

The current recommendation retains EcoPass, Neighborhood EcoPass, CollegePass, and the nonprofit program and adds a low-income pass and a youth pass.

RTD and the working group have received a lot of requests and demands for an increase of the agency’s low-income program. In the option being considered, the group has recommended offering a low-income pass that extends a 40 percent discount to qualifying individuals whose household incomes are at or below 185 percent of the federal poverty guidelines. This pass effectively removes the cap on the amount of discounted fares offered to low-income individuals through the existing RTD nonprofit program, which has been in place for decades to assist low-income riders and would be retained.

The working group recommends adding a youth pass, which would discount the fare for riders 13 through 19 years old by 70 percent (an increase from the current 50 percent discount). Individuals 12 years old and younger would ride free with a fare-paying rider.

The working group recommends retaining these types of passes and pricing them based on updated service level areas (for EcoPass) and the face value of the trips taken (for Neighborhood EcoPass and CollegePass). The group is considering phasing in price increases of more than 20 percent for organizations participating in the EcoPass program, neighborhoods, and higher education institutions.

RTD hired a modeling consultant, Four Nines Technologies, an employee of which previously worked with the agency on a fare study. The working group examined a wide range of methods for generating fare revenue, and Four Nines analyzed all five options that had been considered for their impact on total revenue and ridership. The firm’s modeling results showed one unifying fact: Eliminating pass programs resulted in the loss of ridership and revenue. Once the working group saw that analysis, they agreed that the only viable option would be a package that retains EcoPass, Neighborhood EcoPass, CollegePass, and the nonprofit program.

Four options no longer being considered called for:

For decades, RTD has offered riders tens of millions of dollars’ worth of reduced and free fares through its nonprofit fare program. Three years ago, the RTD board of directors voted to increase the amount provided through this program by $1 million, but unmet demand remains. Low-income individuals may benefit from the low-income program recommended by the working group. RTD is dedicated to providing accessible transit. The agency fully supports efforts to bring on external funding to make this program a reality, and it appreciates the commitment of the citizen-led Affordable Fares Task Force to identify potential funding sources for such a program

The Pass Program Working Group has completed all of its meetings to help draft a consensus recommendation. During 2018, as RTD’s staff and board review this recommendation, the agency will continue to seek public feedback.

We want your input. You can submit your thoughts through the portal below or, as dates are announced, attend a public meeting.

Give Us Your Feedback