Route 61AV: What RTD has learned

If you were near our 61st and Peña commuter rail station earlier this year, you likely spotted it: a sleek, rectangular shuttle quietly circulating along a predetermined loop near the University of Colorado A Line, making four stops every 15 minutes. If you stepped aboard, you saw firsthand what made RTD’s Route 61AV unlike any other: The vehicle assigned had no driver.

Route 61AV – made possible through a partnership involving several public and private entities – marks the first time that a driverless shuttle had been introduced on a public roadway in Colorado. The pilot project launched in late January and weathered roadway conditions in three Colorado seasons before it ended in early August. During that time, the 12-passenger vehicle carried close to 600 people along the route, which included the 61st and Peña rail station, the Panasonic and EasyMile offices, and the 61st and Peña Park-n-Ride lot. Riding the shuttle was free for passengers.

Ridership, however, was not a goal of this unprecedented project – learning was. Specifically, we wanted to determine whether an all-electric driverless shuttle, also known as an autonomous vehicle, could serve as a possible first- and last-mile solution for transit riders, referring to the portions of a journey that people must complete on their own to get to or from a transit station. The demonstration helped everyone involved assess the benefits this technology can provide in meeting our region’s future mobility needs. We believe that autonomous shuttle services may well become an integral part of how communities are designed in the future.

Route 61AV involved Transdev, which operated the service for the Regional Transportation District (RTD) and provided an on-board customer service ambassador; EasyMile, which developed and provided the EZ10 autonomous shuttle vehicle; the Colorado Autonomous Vehicle Task Force (Colorado Department of Transportation, Colorado State Patrol and Colorado Department of Revenue/DMV); City and County of Denver (Public Works and Denver International Airport); and Panasonic and Fulenwider (the developers of Peña Station NEXT).

This autonomous shuttle vehicle was approved by the National Highway Traffic Safety Administration and the project was approved by the Colorado Autonomous Vehicle Task Force. Data collected on usage and operability will continue to be shared among project partners to improve future AV deployments and bring autonomous services into wider usage.

For this project, the vehicle was in service from 10 a.m. to 6 p.m. on weekdays, traveling at an average speed of approximately 12 miles per hour. While many public roadway operations require a human being aboard the vehicle, this shuttle did not. In the absence of a traditional steering wheel or brakes pedals, the autonomous shuttle vehicle relied upon technology to operate along a pre-programmed route. EasyMile notes that its shuttle and operating system have been tested and verified over 200,000 miles in 22 counties, and have transported more than 320,000 people with no accidents or injuries.

The vehicle is accessible for wheelchairs, with an automatically deploying access ramp enabling passengers with disabilities to board and disembark. For our project, a live customer service ambassador was on board at all times to help answer questions and ensure safe vehicle operation. In the event of a problem, the customer service ambassador on board enabled two-way communications between passengers and RTD.

In completing this project, RTD gathered valuable information about what autonomous vehicles are capable of and what challenges they can encounter in a transit setting. We observed a number of service disruptions, for example, because of technological challenges related to snow, heavy rain and steam generated by melting snow as sensors interpreted these weather events to be obstacles in the path of the vehicle. We were also impressed by the response of the vehicle and technology supplier to address these issues in future generations of driverless shuttles being brought to the market. Improvements are already in process to its sensor technology to address weather-related sensitivities, and battery life to improve vehicle range.

As RTD considers further uses for autonomous vehicles, we continue to look for additional funding/grant opportunities and for opportunities to partner with interested parties to demonstrate and investigate advancements in AV technology in more complex operating environments. 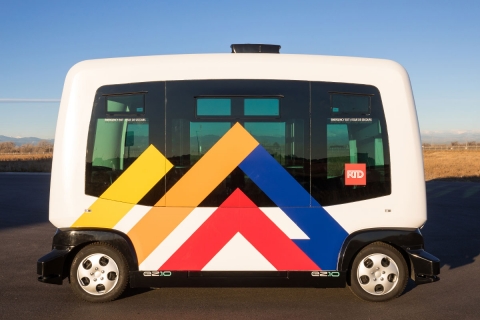 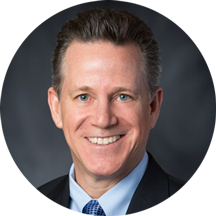 Dave Genova is the General Manager and CEO for RTD. He has been with RTD for more than 21 years, serving as the Assistant General Manager of Safety, Security and Facilities for the past eight years. In that position, his responsibilities included overseeing safety certification for rail line openings and the renovated Denver Union Station.