All day, every day, RTD’s security team is working to keep employees and riders safe 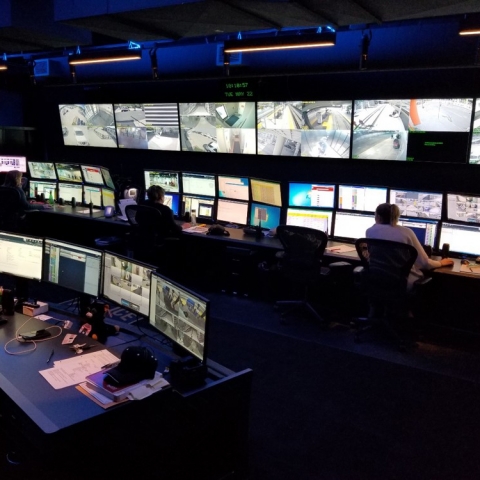 A hardworking team of RTD employees is always at work – some seen and some unseen. These are the dedicated members of the agency’s security division.

In RTD’s SCC units, employees are working around the clock. Due to the size of the agency’s service district, the two dispatch centers allow for efficient operations and quicker response times.

“We do everything a 911 call center would do to dispatch an appropriate response,” said Michelle Lawrence, manager of 911 operations and training.

The SCC team answers all emergency and non-emergency phone calls, monitors live video feeds and works with police and security officers to keep everyone in the RTD community safe.
One of the SCC locations monitors the bus stops south of I-70 and the entire light rail system. The other oversees bus stops north of I-70 and the commuter rail lines.

When the public calls the security hotline at 303-299-2911, uses the Transit Watch app or sends a text to 303-434-9100, dispatchers work directly with light rail control and bus dispatch to respond as quickly as possible to any incidents that are reported.

They also work with local law enforcement for any necessary police response.

“We are first responders in dispatch world. We have the responsibility for helping people,” Lawrence said. “We are responsible for sending them help as quickly as we can. We are juggling a lot at one time trying to coordinate response.

“RTD’s SCC is not a traditional 911 dispatch environment. With a typical dispatch, people are typically at their house. Our world is [to] coordinate where they are going to be in 10 minutes. We are very specialized in what we do.”

While transit police dispatchers monitor RTD properties virtually, RTD’s transit police officers and TSOs are out interacting with the public across the system.

“RTD’s transit police are also working every day to assist in providing security and coverage for the RTD passengers,” said Deputy Transit Police Chief Steve Martingano. RTD continues to work with off-duty officers from local police departments, including Arvada, Aurora, Denver, Thornton and Lakewood to provide assisting coverage for RTD in those cities. RTD transit police also utilize transit security officers (TSOs) on trains, buses and at facilities to provide a visible security presence and a deterrence for criminal behavior.

Many members of RTD’s security staff have a military background, he noted, so they understand the call for assistance and to be ready to help in hard times – like an emerging public health crisis.

Martingano added: “These individuals are making great sacrifices to keep the essential need of public transportation operating for our passengers.”