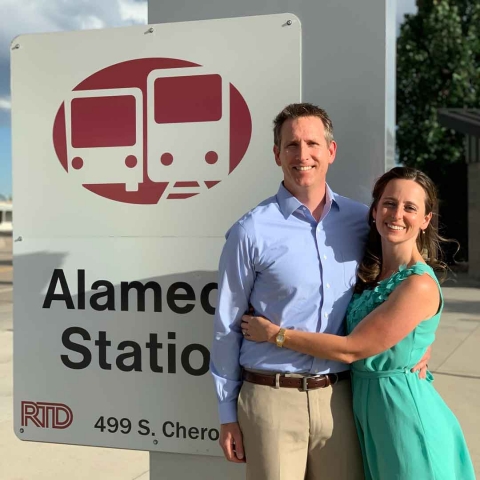 Just before Labor Day in 2017, Stacey Jensen was listening to a murder story on headphones when she lifted her bike onto the 7:09 a.m. F Line train and met her own fate.

He wasn’t a serial killer, thankfully. Just a tall, cute commuter named Dan Kowalski, whose gentlemanly version of stalking involved minor eye contact and then introducing himself at the rack where they both locked their bikes.

There’s no Hollywood drama – but lots of Hollywood romance. This week is the one-year wedding anniversary of Stacey and Dan, self-described nerds and transit fans who once met on a train, and now long for the day their office reopens so they can once again jump on the F Line to work and relive their chance meetup every new morning.

That morning in 2017, Dan had ridden his bike a few blocks to his usual F Line stop at Alameda and Cherokee. He was much earlier than usual, as he was preparing for a big meeting at CoBank, a Denver Tech Center agricultural lender where he’s an economist.

He wore a suit and a bike band to keep his pants clean, absolute eye candy to other nerdy commuters.

Stacey, a lawyer for CoBank, was waiting at Louisiana and Pearl for her usual F train. She took her bike everywhere to train for the long Pedal the Plains ride. The first train car was full, to her irritation, and she had to stumble over to the second car, where unbeknownst to her, Dan discovered her and thought her bike shorts also looked pretty cute.

Dan made eye contact. Stacey wasn’t exactly warm: On her audiobook, she was right at the part where the alcoholic heroine is either going to kill or be killed with a corkscrew, and she wanted to find out which result before her work stop.

The novel? “The Girl on the Train.” We kid you not.

Dan tried a bit harder, waiting for her at the work bike rack and introducing himself, then running off to his meeting. Later that day, his dad would call and ask him how the big meeting went, and Dan said the meeting really stunk but he met a nice girl.

Stacey, meanwhile, found out who the murderer in the story was (ex-husband – for purposes of this romance story, emphasis on the “ex”). And then she realized she’d been a bit rude to cute Dan, and that she could look up an unusual name like “Kowalski” in the company directory.

She sent him an email. Nice to meet you, sorry I was rude, it was a good book, ha ha. They started chatting about biking and trains and their work, and you could have written the ending right there.

“Lots of people we work with are Type As, and we’re both different from that, which was nice,” Stacey recalled.

They went to lunch that first day, taking their bikes on the train one stop back toward downtown so people from work wouldn’t see them. While they dated, they often took the train, sometimes getting on at different stops “and jumping on the second car and hey! There you are!” Stacey said.

When it came time for the inevitable wedding, they wanted to take dress photos on the F Line but found out they needed a permit. (Come on, RTD, we’re trying to make a movie here.) They now live together at Dan’s house, each riding their bikes at different times to get to the station. When the weather’s bad, they drive to the station.

“I-25 sucks! Even if you take it in early rush hour, home is like two hours, so it’s the way home that’s terrible,” Stacey said.

CoBank went to work-from-home in mid-March. “Quarantine, that’s how you know you found someone you like, considering you are trapped with them and only them,” Stacey said. “We’ve been taking pictures throughout quarantine to see if we get happier or sadder. So far it’s the same – happy.”

The first wedding anniversary is paper. There’s nowhere to go yet, but Dan was thinking of going to the station and buying Stacey a train ticket on paper. Even though she has a work pass – hey, let the nerds do it their way.

It’s early yet, but Stacey is fairly certain she’ll never be that Girl on the Train, with the sociopath for a mate.

How can she tell?

Well, Dan hated cats. So Stacey, of course, had to not only go out and get a rescue cat, but a diabetic rescue cat that needs shots every day and languished in the shelter for four years.

In the coronavirus home office, Talulah the cat goes to hang with Dan all the time.

And when it rains and thunders, Talulah sits in his lap.