Powering the Regional Transportation District (RTD)’s battery-electric bus fleet on the 16th Street Mall will cost at least 30 percent less starting in January under a recommended decision by a Colorado Public Utilities Commission (CPUC) judge to adopt a settlement agreement with Public Service Company of Colorado (PSCO) that provides a new rate structure for RTD and other customers with electric vehicles.

“Electric vehicles are a relatively young technology for the transit industry, and our knowledge around capital requirements, operational costs and best practices is evolving every day as we study our fleet and determine the most appropriate, cost-effective ways to manage it,” said RTD General Manager and CEO Dave Genova. “We are confident that we are doing all we can as an agency to move the use of this technology forward. We also recognize that adding electric vehicles to our fleet requires addressing the cost of electricity.

“As we learn, energy providers like Xcel are learning with us. We greatly appreciate that Xcel Energy has been open to structuring a new rate for electric vehicle charging.”

Xcel Energy’s proposed electric vehicle rate incents customers to charge at night, during the off-peak period for the electricity grid, by offering lower energy costs during that period. The new rate includes fewer demand charges, which currently account for about 80 percent of RTD's electricity costs associated with the Mall fleet. Xcel Energy also has included critical peak pricing, which discourages electric vehicle charging during times when the grid has the least capacity. Finally, the rate features a lower winter season base rate, a change that will help decrease RTD's energy costs since RTD’s electric buses need to charge more often on days with colder temperatures.

RTD is one of Xcel Energy’s largest commercial electric vehicle customers. The agency’s fleet of 36 battery-electric buses is one of the largest in the country, serving more than 9.4 million riders last year. The fleet has operated on the 16th Street Mall in downtown Denver since 2017. Buses stop at every block along the busy downtown thoroughfare, taking about 15 minutes to travel 1.42 miles. During the busiest morning and afternoon periods, a vehicle arrives every 90 seconds. Free bus service on the Mall’s electric vehicles is offered every day between 5 a.m. and 1:20 a.m. the following day.

RTD is committed to improving air quality in the region, and the Mall vehicles achieve agency goals with regard to environmental stewardship. RTD has implemented a smart charging system to help minimize the number of buses charging at one time, a change that manages the amount of electricity being used and thereby lowers electricity costs. The agency will continue to determine how to charge the fleet as effectively as possible and lower operating costs. 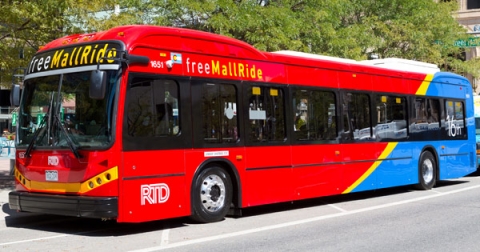