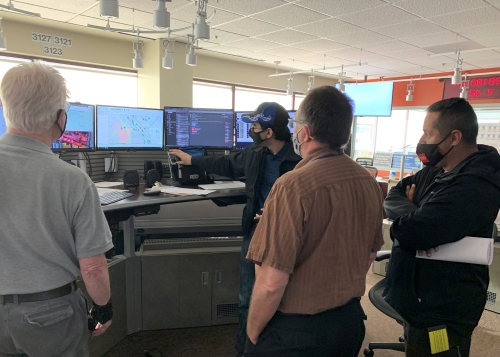 Standing in the RTD Bus Operations Dispatch Center at District Shops gave operator Jerry Jimenez a perspective he had not had from his seat in a vehicle. At Saul Romero’s workstation, he watched as the dispatcher pointed out where operator calls dropped onto his screen in order of priority. He heard how the radio system functions and learned that dispatchers can summon police agencies from across the region as needed. Searching for a vehicle, Romero showed that he can see “what trip he’s on, his bus assignment, his box number, who voted the run and who’s currently assigned the run.”

Romero glanced at Jimenez and fellow operators Bill Rickords and Ron Keilwitz. “You ever get those text messages to your radio?” he asked them. “This is how we send them out here. I can send it out to a vehicle, certain vehicles, vehicles on a route, multiple routes, even buses assigned to a certain garage.”

Jimenez surveyed all of the information on display. “How many hours, days or weeks of training do you go through to be able to do this?” he asked. Seven weeks of rotating shifts, Romero said: “It’s a lot to take in.”

The operators’ recent visit to the center was one of four elements included in current refresher training, which began in September and also includes modules for customer service and defensive driving, as well as a presentation about different types of customer needs. Loradeane Clinkenbeard, manager of bus operator training, confirmed that two-thirds of operators have completed the training as of this week.

RTD’s approximately 800 bus operators complete a minimum of eight hours of refresher training each year, with three of those hours devoted to Americans with Disabilities Act (ADA) topics. Areas of focus change every quarter. Fred Worthen, Assistant General Manager of Bus Operations, said the behind-the-scenes look at Dispatch was planned in response to RTD’s safety and security peer review conducted earlier this year by the American Public Transportation Association (APTA). As recommendations from that work were discussed at the executive level, he said, “it became evident to me that there is a real gap between our operators’ understanding of Dispatch Operations and the reality our dispatchers live and function in.”

Watching Romero interact with the operators, Worthen said, “This is also an opportunity for drivers to talk to our dispatchers directly about some of the challenges they face, so we can both figure out ways we can support each other better in the field.” Over the last year, Dispatch fielded 122,609 calls from RTD and private contractor buses – about 335 calls a day – with an average response time of 2:28 for a routine call, 53 seconds for a priority call and 1:20 for a silent alarm.

If an operator doesn’t understand what’s going on, “sitting in silence for 2 minutes can feel like an eternity, like 20 minutes,” Worthen acknowledged. “I think there’s also some challenges with when we get into a firestorm, if we’ve got multiple accidents and incidents occurring.” When multiple dispatchers are engaged in a response – calling 911, calling vehicle maintenance for a tow, dispatching a supervisor – these elements take time, he said. “And unless you physically see that, it’s really hard to understand the support that it takes in the background to be able to help our operators get through the day.”

Romero agreed. Before working as a dispatcher, he drove for RTD for two years. The perspective he now carries is much wider, he said.

“It’s easy to take the perspective on a route (level): my bus is late, it’s impacting me. You don’t see the whole system,” Romero said. As an example, he said, as an operator he couldn’t understand why he was assigned a trip in Parker at night that had been canceled for 20 minutes. When Romero arrived, “I picked up the last few passengers who wouldn’t have another way to get home. That’s a different perspective.”

About 750 buses could be in service at any time. The statistics are mind-blowing, Romero said. “But the system runs shockingly well – it really does. I can look during rush hour and all the buses are green, within their time range, they’re hitting all their connections.”

A total of 15 bus dispatchers share the work, four each day from 5 a.m. to 8 p.m., with one added on Friday afternoon. One or two are on in the middle of the night. Responses are divided by route groups. 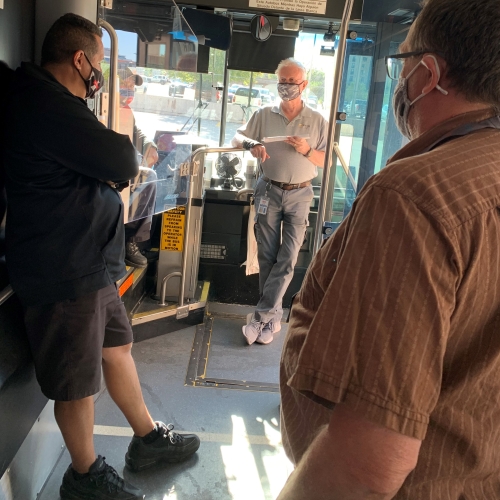 On their next training stop, Jimenez, Rickords and Keilwitz took turns acting as customers to work through various customer service scenarios, with operator instructor Samantha Maertins helping them consider best practices. Scenarios included a child not paying a fare, asking a customer to move to accommodate a customer with disabilities and a customer with hearing difficulty. And what if someone says he wants to go home?

“Ask that person, ‘Where is home?’,” Maertins said. “You’ve got to engage with them, instead of just saying, ‘Last stop.’” If they can’t say where home is, she added, the next step is to contact Dispatch for advice and assistance. She reminded her colleagues: “We’re not just bus operators, we’re customer service representatives.”

The trio concluded their training with Greg Ortiz, who guided them through checking that all five mirrors on a bus were set properly. Afterward, they took turns driving the vehicle on city streets as Ortiz observed their skills, watching as they scanned the road, made turns and checked their mirrors. As the bus maneuvered through a tight, narrow neighborhood with children, Ortiz noted that RTD’s operators must contend with difficult driving conditions every day.

“This training is not new, but we’re reinforcing it more, to make our drivers feel a little more comfortable and to reinforce safety at all times,” Ortiz said. “That’s what we’re doing.”