G Line: one year of connecting the western suburbs to downtown Denver 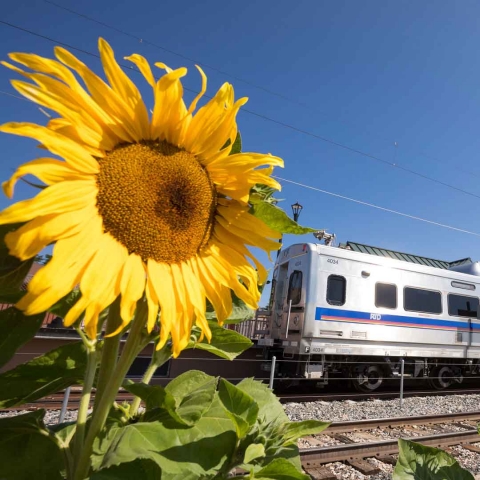 The G Line opened on April 26, 2019. It was a Friday, sunny and the perfect day to take the inaugural trip from Union Station to Wheat Ridge & Ward Road Station.

Former RTD General Manager and CEO Dave Genova noted then, “The G Line will be another easy, convenient and reliable transit alternative to driving and being stuck in traffic. We’re putting another piece of the FasTracks puzzle into place.”

The G Line operates on 11.2 miles of track connecting Wheat Ridge, Adams County and Arvada to downtown Denver. As the line celebrates one year of service, we reflect on the impacts the rail line has had on transit in the Denver region.

In 2004, voters approved the FasTracks plan, which enabled RTD to expand transit throughout the region. This initiative included the addition of commuter rail, with trains capable of carrying more passengers and traveling faster than light rail vehicles.

The G Line – along with the University of Colorado A Line and the first segment of the B Line – is part of a $2.2 billion public-private partnership program called Eagle P3, which includes more than $1 billion in federal grant funds. In 2010, RTD selected Denver Transit Partners (DTP) as its contractor and concessionaire.

Eagle P3 has contributed more than $908 million to the Denver area since its inception including $187 million in employee wages, $404 million in equipment and services and $603 million in subcontractors.

Development has begun along the G Line including multifamily residential and commercial. The City of Wheat Ridge, through sales tax, has invested in developing the area around Wheat Ridge & Ward Station. Vendors in Arvada reported increased foot traffic after the G Line opened.

Trains on commuter rail are considered “on-time” if the vehicle departs from a station no more than 0 minutes early or five minutes after the scheduled departure time. According to the most recent data supplied by DTP, the G Line demonstrated on-time performance of 97.9% last month, with an all-time average of 95.2%. Both exceed the commuter rail goal of 90% on-time performance.

Average daily ridership in February – the most recent month with complete data – was 5,034 passengers, approximately a 200-person increase in daily ridership over the prior month.

RTD was the first transit agency in the United States to implement PTC from the ground up. Incorporating the new technology resulted in a delayed opening of the G Line, but the system is now in place and keeping passengers safe.

RTD is sharing the lessons it learned related to PTC implementation with other transit agencies to help them in their own efforts.

The G Line provides more access and transportation options between the western suburbs, Denver and beyond.

Before the line opened, RTD and DTP held an open house to ask what residents of the corridor were looking forward to when the G Line opened. Former District L Director Lorraine Anderson stated, “I am really looking forward to being connected to the rest of the Denver region by train. I’ll be able to go downtown, to Rockies games and the theater. I’ll also be able to go to work! It will be a great thing to connect people to places and other people.”

With eight stations and seven Park-n-Rides along the G Line, this sentiment was echoed by other members of the public who shared their ideas.

One couple stated, “We’d get on at Wheatridge & Ward Road Station and take the train downtown so we won’t have to park. We could go to a Rockies game, plays, art shows and DIA—that would be really nice going to DIA.”

Another woman noted, “The closest station to me will be Olde Town Arvada Station which is about a block and a half away from my home. I can see the station from my front yard and look forward to being able to walk to it.

The G Line also allows those living outside of the western suburbs to discover what that area has to offer, such as convenient access to Olde Town Arvada’s restaurants, boutique shops and library.

In only 27 minutes, a passenger can ride the entire length of the G Line. They can see new development along 41st & Fox and Arvada Ridge stations, several Art-n-Transit installations at Olde Town Arvada Station and a great view of the Rocky Mountains from Wheat Ridge & Ward Station.

The G Line’s first birthday fell during the COVID-19 pandemic. Non-essential businesses were forced to close, ridership across RTD’s system decreased 70% and people stayed home unless they had critical business to conduct.

This time, like all disruptions in life, will pass. When it does, the G Line will be there to continue making connections and supporting growth in the western Denver area.