Since they began operating in the Denver region in 2016, RTD’s commuter rail trains remain unlike any other mode of transportation the agency operates. They are heavy – at 70 tons while empty, each rail car is five times the weight of a standard 40-foot city bus. They can move fast – 79 miles per hour at top speed. And they make fewer stops than RTD’s light rail vehicles, connecting travelers between Denver’s Union Station and destinations that are farther away from the central core of the system.

The 66 commuter rail cars in rotation that travel along RTD’s four commuter rail lines also must meet stringent regulations put forth by the Federal Railroad Administration (FRA) and submit to crashworthiness testing, which places 400 tons of force onto each empty vehicle to check for the strength that was designed into the frame and structure and ensure that travelers inside would remain safe. They must meet smoke, flame and toxicity requirements for all material used within the trains – a fact that leads Joe Phillips, RTD’s manager of commuter rail vehicle maintenance, to conclude that “they are probably the safest means of transportation that you can take in the entire state.”

But what about the air? Amid a pandemic, it’s natural to wonder about air quality in enclosed spaces, as well as how the air inside each 85-foot-long vehicle is cleaned and circulated.

The heating, ventilation and air conditioning (HVAC) system exchanges the air within each rail car about every 4 minutes – or 15 times per hour – with the doors closed, an estimate determined by a vehicle engineer. Additional fresh air is introduced into the passenger compartment each time a commuter rail train stops at a station and the doors open. 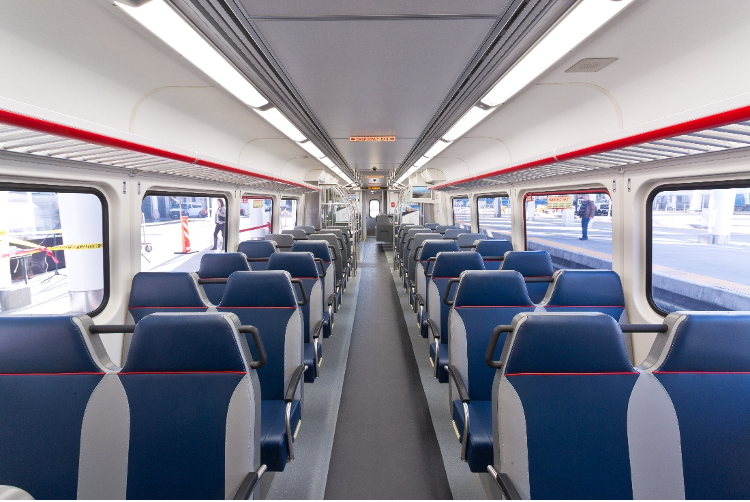 Each car includes two HVAC rooftop units that run independently of each other in the event that one fails. With both rooftop units running, 3,800 cubic feet per minute of air is supplied to each car, 29% of which is fresh, 71% recirculated. This air is supplied using overhead ducting and registers that run the length of the car. It is returned to each unit in the ceiling near the passenger doors on each end.

The HVAC system maintains passenger comfort by managing air temperature and humidity inside each car within specified ranges. Each car uses floor, underseat and door threshold heaters in the winter and during layover conditions to maintain a minimum air temperature inside the car.

Phillips, who oversees this work, joined RTD last year from Denver Transit Partners (DTP), the consortium of private companies that operates and maintains three of RTD’s commuter rail lines: the University of Colorado A Line, the B Line and the G Line. (RTD runs the newest commuter rail line, the N Line, which opened Sept. 21.) DTP is responsible for maintaining all of the commuter rail cars, which are moved around in pairs and can be placed on any of the lines as needed.

Phillips says the trains are safe not only because of their design, but because they are inspected every night by a qualified maintenance person and cleaned by a contractor using the same methods used on other RTD vehicles, to ensure passenger safety. With RTD’s commuter rail trains being self-propelled passenger units, they must meet strict federal safety standards for both locomotives and passenger cars. 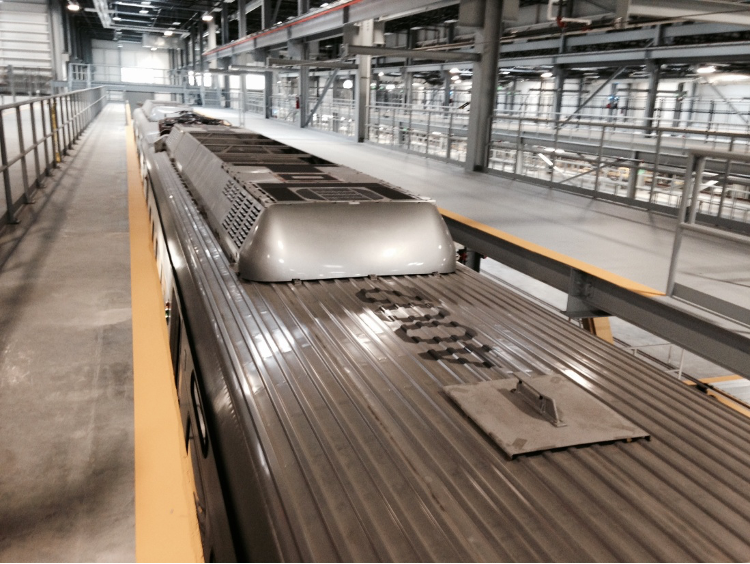 During daily inspections, Phillips said, qualified maintenance personnel are looking for faults. If an HVAC fault light came on, they would further inspect the HVAC system to determine what caused the fault light and whether it can be repaired before the next day. If that train cannot be repaired, it is set aside, and a new train takes its place. “They are not allowed to send a train out of the building with any fault lights on it, per FRA regulations,” Phillips said.

The HVAC system is on a list of items to be inspected in full on every two-car train every 92 days, a time frame established by the FRA. Each inspection introduces more items to be inspected, per federal regulations. Regulations also take into account manufacturer recommendations. Any changes made to vehicles outside of federal regulations must be approved by a configuration control board.

An example illustrating this point is the air filters themselves, which are now changed every 92 days. When commuter rail was introduced to the Denver metro region in 2016, the manufacturer of the HVAC system told the vehicle manufacturer that the filters should be changed every 30 days. “We were changing them with that frequency, and there was nothing bad about them,” Phillips said. “You could see that they were relatively new.”

A configuration control board does not have to approve a different frequency at which the air filters are changed – that falls to the manufacturer of the HVAC system, with the understanding that if a fault were to be shown because of wear and tear during the longer time frame, it would return to changing the filters more frequently. But the board would have had to grant its approval had a different type of filter been considered. This approach applies to all components on RTD’s commuter rail cars, Phillips said.

With 25 years of experience in the railroad industry, Phillips wants people to understand the safety considerations that drive every aspect of how rail cars are manufactured and operated. He knows them “top to bottom, front to back, inside and out,” having started his career as a welder on passenger rail cars, designed aspects of passenger rail and consulted with railroads before joining Denver Transit Partners.

“The general public, anybody who rides those vehicles and operators need to understand that they are extremely safe,” Phillips said. “I don’t think a lot of them know or think about that.”