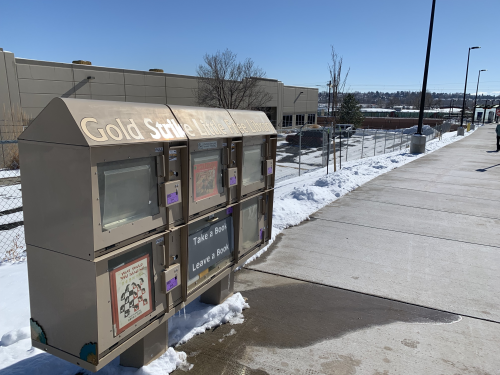 This story begins – as most good stories do – with a game of Pokémon Go. Arvada artist Nikki Biefel roamed RTD’s 60th/Sheridan•Arvada Gold Strike Station last spring, smartphone in hand, working to catch the virtual creatures that revealed themselves on her screen. A short walk away from the rail platform, she noticed a beige rack of newspaper boxes – and stopped.

The metal racks were largely abandoned, she observed. The six boxes were filled with trash. But as Biefel opened each of the doors on the rack, she found the structure to be an attractive, functional piece of industrial design, intended to be opened countless times.

“This should be a Little Free Library,” she recalled thinking. “For me it was an obvious step: It was used for publications and built for publications. It’s clearly the same function.” Consider the pleasure, she said, in opening the doors and discovering the rack to be full of books.

Like most people, Biefel was familiar with Little Free Libraries, book-sharing boxes that are freely accessible to all and in more than 100 countries, according to the Wisconsin-based nonprofit at the heart of the effort. The organization notes that there are more than 100,000 Little Free Libraries worldwide – including some in her neighborhood. But this approach, were Biefel to pursue it, would be different than adding a box on one’s property and registering it through the Little Free Library website. Reclaiming infrastructure at a transit site for a different purpose than originally intended – and assuming responsibility for it, as a Little Free Library steward – ultimately would require obtaining permits from RTD. The racks are RTD property.

Biefel moved forward with the project in May, removing the trash and scrubbing the structure with a bucket of Simple Green. She labeled the rack as “Gold Strike Little Free Library,” began filling each of the boxes with books and established a Twitter presence for the project, @StrikeLittle. In the coming months, interest in the endeavor exploded, with individuals and organizations including BookGive providing Biefel with boxes of books. She picked up more at a Jefferson County Public Library book sale.

As Biefel restocked the rack, she noted on Twitter the titles that had been added and chronicled the interactions she had with library patrons. In July, she wrote, a man named Don exclaimed, “YOU PUT THE BOOKS HERE!” “He likes Time Life picture books and woodworking books,” she recounted. “He also takes books for his grandson. He held the doors open with his cane while I refilled.” 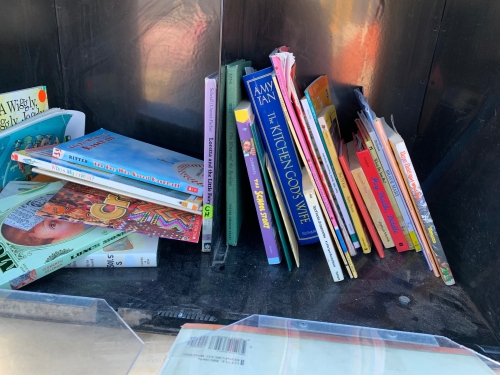 “I had become an admirer of Nikki’s because she clearly devoted a lot of time to it,” Cook said. The two initially connected after Cook featured the Gold Strike library in a newsletter, prompting Biefel to identify herself as the person behind the rehabbed attraction.

Biefel’s focus expanded in November, when Deya Zavala of Mile High Connects tweeted a photo of the empty rack at RTD’s US 36•Sheridan Station, prompting Biefel to observe, “Look at our poor busted sister. Thoughts?” Biefel said she would be happy to remodel the box, but someone needed to maintain it. Her tweets caught the attention of Cook, who said there was a bit of money left in an account established to fund a few leaning rails for bus customers along Ralston Road in Arvada. Days later, the rack at Sheridan was cleaned, parts were ordered and books were added. @WestyLittleFree debuted on Twitter. Within two weeks since Zavala’s post, “Westy Little Free Library” opened, with new windows, bolts and a handle.

“Thank you for taking books, leaving books, contributing to, and appreciating this project,” Biefel tweeted on Nov. 25. “The people supporting these big metal boxes are just the best.”

Interest in the project grew quickly from there, with two retrofitted Little Free Libraries added in November, one at Clear Creek•Federal Station and the other at Pecos Junction Station. Biefel submitted paperwork with RTD in December to carry responsibility for the newsracks as permitted at Gold Strike, Clear Creek and Pecos Junction stations, neighboring stops along the G Line. Sheridan Station is not currently permitted, and a steward is still needed for that location. Those wanting to donate books should contact BookGive, Biefel recommended. A total of eight to 10 people are involved in the project, she said, including silent investors. 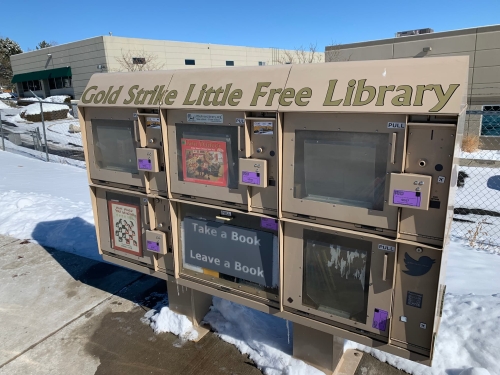 “They are responding to a need and at the same time providing these lovely books,” Cook said of the project, adding that Biefel “is somebody who spotted an opportunity, a need she could fill.” Biefel’s work, Cook said, connects communities in meaningful ways.

Biefel reflects on how the libraries bring people together – and how important they have proven to be during a global pandemic. As people came to understand that COVID-19 is not transmitted through touch, she said, they felt comfortable riffling through a box of books and interacting with others outside. Each rack holds about 300 titles. She has added books in languages that include Japanese, Chinese, Navajo and Braille.

“The best part of the project is all the people I meet, and it’s why I keep doing it,” she said. “Every time I go and fill one of the boxes, I meet one of my neighbors.” Children tell Biefel which books they like, and she suggests new titles for them to consider. Adults thank her for her work and share what they are reading.

Biefel calls the Little Free Libraries “my most beloved art project.” Why? “Because people use it, and people interact with it.”