Our rider alert system is currently down and is unable to send notifications to subscribers at this time.
Check Next Ride for bus and train information.

Mike has been an Access-a-Ride driver with our contractor, VIA Mobility Services, since Jan. 17, 2011. He enjoys his job and the opportunity to help others. Previously, Mike owned his own concrete flatwork company, working on sidewalks, driveways and floors. Due to a downturn in the economy, he sold the business and moved to Missouri. He then worked as a supervisor in the same industry.

Soon after, Mike returned to Colorado and became a truck driver. After driving for a while, he decided that he wanted a job that allowed him to be home with his family every night. While at the grocery store with his wife, Mike noticed a help wanted sign on the back of a VIA bus. “I can drive trucks, so I can drive that,” he recalled thinking. Mike called and was hired, and the rest is history. 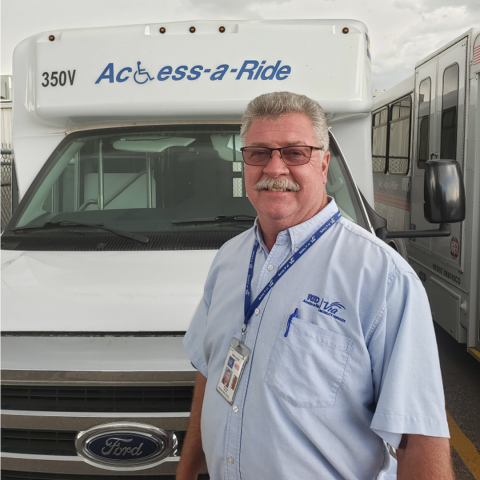