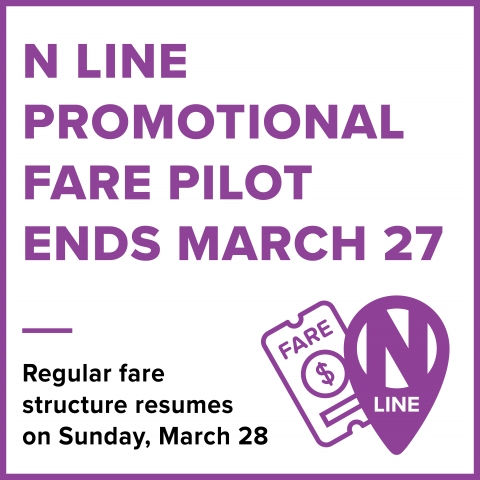 Six months after the Regional Transportation District (RTD) opened its newest commuter rail line, the N Line, with a Local fare in place to ride the entirety of the line, a promotional pilot program is ending at the close of the service day on Saturday, March 27. The agency’s regular fare structure for the line resumes at the start of the next service day, on Sunday, March 28.

Following a week of free fares after the N Line opened on Sept. 21, 2020, customers have been able to board at any of the seven stations along the line and pay a $3 Local fare, with exceptions for trips that require transfers out of the Local service area. Starting Sunday, a trip that extends from Union Station in Denver to either of the two stops farthest along the line, at Northglenn•112th Avenue Station or Eastlake•124th Station, will carry a $5.25 Regional fare. A fare calculator tool on the N Line webpage allows customers to see how their fare may be affected.

RTD’s Board of Directors adopted the N Line fare pilot to encourage ridership on the newly opened line, which serves Denver, Commerce City, Northglenn and Thornton and includes a stop at the National Western Complex. A trip between Union Station and Eastlake•124th Station, the current end-of-line stop, takes about 29 minutes to travel 13 miles.

Regional trips are those that extend through three rail fare zones. To facilitate the pilot, the last two stations on the N Line were considered as being located in Fare Zone B – and, with the pilot’s conclusion, will revert back to their geographic location in Fare Zone C. As such, a trip between either of these stations and Union Station, located in Fare Zone A, will now require customers to pay a Regional fare.

The entire 18.5-mile N Line is part of RTD’s 2004 voter-approved FasTracks program to expand transit across the Denver metro region. RTD continues to look for ways to fund the remaining 5.5 miles of the line, from Eastlake•124th Station to State Highway 7. When the corridor is complete, it will include two additional stations, for a total of eight stations.

To learn more about this rail line, visit the N Line webpage.