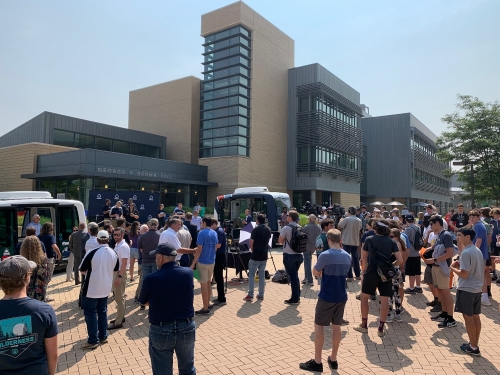 RTD Board members and staff joined elected officials, students, faculty and staff Aug. 10 at the Colorado School of Mines to celebrate the launch of the nation’s largest fleet of low-speed, autonomous electric shuttles, the first in a plan to launch in multiple cities across the state.

The first phase of the program includes a fleet of nine driverless, zero-emission EZ10 shuttles from technology-provider EasyMile, powered by Siemens VersiCharge AC chargers, to connect Colorado School of Mines’ central campus, athletics complex, student housing and downtown Golden. The low-speed shuttle service in Golden, named The Mines Rover, is designed to operate in normal traffic, free of charge and available to the public. Each shuttle can hold six seated passengers and will have an onboard customer service ambassador – a trained Mines student – who will engage with riders and take over manual control of the shuttle if necessary. The shuttle will operate along three fixed routes with designated shuttle stops and arrive every 5-10 minutes along the routes.

Phases two and three of AvCo plan to launch in Greenwood Village and Colorado Springs, respectively, over the course of the next year to demonstrate the shuttles’ ability to operate in different environments, reduce carbon emissions associated with transit and fill different mobility gaps. 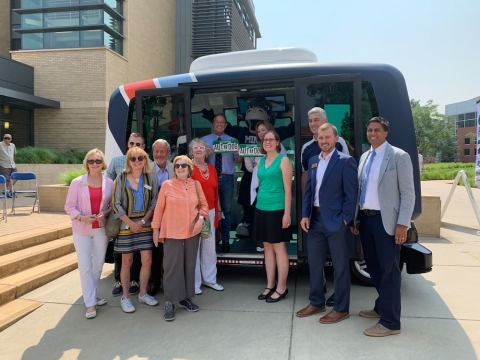 Routes in all three locations will be added to RTD’s Trip Planner, enabling customers to see and consider AvCo options as they map their travels.

RTD in 2019 took part in the first on-road deployment of an autonomous vehicle in Denver and the state of Colorado, as part of a six-month pilot program at the 61st•Peña Station along the University of Colorado A Line. The project, called Route 61AV, assessed the viability of autonomous services in providing first- and last-mile connections to and from transit. In that project, the self-driving shuttle made four stops: the commuter rail station, two office locations and the 61st•Peña Park-n-Ride lot.

More information on The Mines Rover is available on the Colorado School of Mines project page. To learn more about the overall AvCo program, visit www.avco.city.