After extensive planning and analysis, RTD has debuted a new rider alert system that reflects many of the improvements the public has asked for.

RTD’s prior rider alert system – in place for 20 years – originally was created to communicate information to the agency’s operators. About six years ago, this tool was linked to RTD’s webpage, enabling the public to sign up for rider alerts about detours, delays, stop closures and other issues affecting RTD’s various bus routes and rail lines. Thousands of people have opted in to receive these updates, sent every day by the agency’s digital customer relations team, bus and commuter rail dispatch, and light rail control.

As technology advanced over the years, the functionality of the system became outdated. And the No. 1 frustration voiced by the public is that the alerts weren’t tied to real-time information to inform their decision-making. If a light rail trip had been canceled, for example – a legitimate reality of late – riders would only know this fact had they been sent an email update for that specific line. Changes to light rail trips would not have been reflected in Next Ride, Trip Planner or any of the apps (e.g., Google Maps, Transit) that rely on RTD’s real-time feed for current arrival and departure times. Instead, canceled light rail trips would continue to be presented as options on these platforms, with Next Ride and Trip Planner displaying scheduled arrival times and false predictions.

Going forward, the plan is to include cancellations for future days in Trip Planner, as well as to add rider alert icons to that platform and Next Ride. Other changes will allow riders to create an account and subscribe to alerts down to the station or stop level, which will be delivered initially by email – and, later, by text message. A preference for the latter is often expressed by customers, and it was voiced during an RTD survey in May about the agency’s alerts that drew responses from more than 1,500 people.

“This is going to be huge,” said Virginia Johnson, lead digital customer relations liaison. “I think a lot of riders have the impression that we don’t put information out because we don’t want to. We want to put out more information during incidents; we just haven’t had the tools to.”

A key change the new system brings is consistency in verbiage, a fact resulting from the use of a platform that enables employees to write alerts automatically and quickly based on mode and cause. Because the system is tied to RTD’s data feed, employees no longer have to manually research routes and write alerts from scratch. The time savings is substantial – it now takes seconds, not minutes, to post alerts simultaneously on multiple platforms with a single click of a button.

Employees of Denver Transit Partners, the concessionaire that operates RTD’s commuter rail system, also will use the new platform to send rider alerts for the University of Colorado A Line, the B Line and the G Line. Due to system limitations that RTD is working to overcome, Next Ride and Trip Planner are unable to process information about the cancellation of commuter rail trips.

The launch of the new system was made possible through a Colorado Department of Transportation FASTER Transit Grant, which is covering the $20,000 cost to get the platform up and running plus the $120,000 annual subscription cost for the first year. RTD will pick up the cost past that point. Several of the agency’s teams were heavily involved in making the project happen, including information technology, digital marketing and customer care.

RTD surveyed transit agencies across the country to better understand the rider alert systems they use and ultimately chose a platform also used by the Massachusetts Bay Transportation Authority, responsible for public transit in the Greater Boston region, and TransLink, which manages Metro Vancouver’s transportation network. Employees with both lauded the system for its ease of use by employees and customers.

Also taking place alongside this project is a simple change expected to have a big impact on customer communication: increasing RTD customer care staffing so that members of the digital customer relations team work alongside members of light rail control and bus dispatch during morning and afternoon rush hours. (All three groups work in separate physical locations.) In so doing, digital customer relations employees will hear about changes to service more quickly and directly – thus further cutting down on time needed to process information and publish rider alerts.

“I’m extremely proud of the positive changes the first phase of this project brings to our customers, and of all the collaboration across RTD that made it happen,” said Will Adams, senior manager of the agency’s customer care division. “Introducing this new system puts us on track to add capabilities within the next year that the public has been requesting for a long time.” 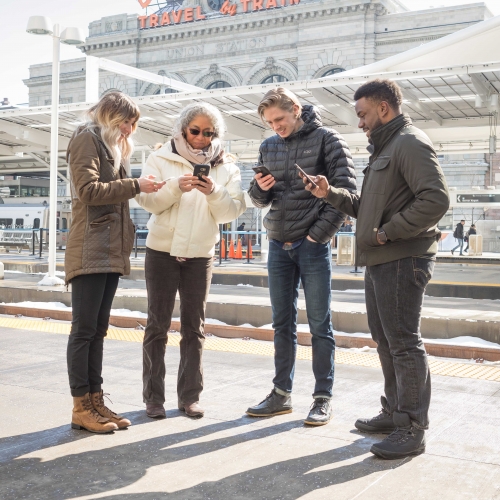