That rail rebuild at 14th and Stout? It’s one of RTD’s most complex engineering feats

Through pandemics, wild financial swings, building booms and neighborhood transformations, the trains and buses and trucks and cars keep rolling through metro Denver. And sooner or later, RTD’s equipment will need some careful attention.

What looks to the public like a gentle curve of light rail tracks at 14th and Stout streets as the inaugural Central Line begins its loop through downtown is actually one of the most complex and vulnerable engineering spots in the RTD system.

So with RTD having just reopened the rebuilt section after over two weeks of overhaul, repair crews deserve a cheer. This project is a reminder of RTD’s core mission to move people most in need of transit safely and efficiently across a busy, thriving metropolis.

The loop beginning at 14th and Stout on the south end of downtown Denver is complex transit territory. Tracks first run under the Colorado Convention Center, then take what for light rail is a sharp turn that puts extra force on the steel rails. Truck traffic on 14th is nonstop. Decades of chemical de-icer, snow, rain and grit have seeped down through the surface since the tracks were laid in the early 1990s.

The tight curve requires an extra “restraining rail” next to the main rail to prevent derailments. Looping requires complex switches embedded in concrete. The rails, the ties, the ballast and the sub-ballast are all encased in concrete to level the roadway for vehicles, meaning all layers must be torn up to start over.

Pre-curved rails and complex switches must be ordered up to a year ahead of time.

Oh, and of course there’s electrolysis. Rail cars run by attaching to overhead high-power electrical lines. The current combines with moisture for an electrified reaction that eventually speeds erosion of the metal rails.

Taken together, these forces of nature and mechanics and time can put a big hurt on one of the busiest spots in all of Colorado.

“It’s the key gateway to downtown, so it’s a linchpin for the rest of the operation to replace this,” said Ashland Vaughn, manager of engineering construction for RTD.

Shutting down a line used by multiple train routes is never taken lightly, even when it’s clear after 30-plus years that a repair is needed. RTD sometimes seeks local noise variances for 24/7 construction work to speed repairs.

While the pandemic has hurt RTD’s overall ridership, the lack of downtown traffic made the September timing for the project easier, Vaughn said. There is also less disruption to the convention center or to nearby hotels, as much of their business has been suspended because of the virus.

RTD’s Assistant General Manager of Rail Operations, Dave Jensen, noted that much of the funding for the rebuild comes from federal grants, and the rest has been planned in the operations and maintenance budget for years. Board members and local officials always want to know why maintenance can’t be done on weekends or late at night, Jensen added, but such major jobs are planned meticulously years in advance.

“It might not feel like it at first, but it’s the least disruptive decision,” Jensen said. “It would have taken seven or eight weeks to get it done just on weekends. We think we made the right decision in this case.”

RTD scheduled two weeks of work for the rebuild. Bus shuttles have carried commuters from 14th and Stout through downtown and to the terminus at 30th and Downing streets. Unexpected glitches always surface: During digging, RTD found a natural gas line that hadn’t been identified ahead of time, and it turned out to be leaking.

Xcel Energy can normally ask for up to a month for such a complex repair, but RTD worked with them to get it done in a couple of days, extending the rebuild to 16 days from the planned 14.

When the concrete is smoothed over and the job buttoned up, only the engineers will know the complexity involved.

“Even within RTD, some people just don’t get it: ‘Why’d it take so long and why did it need to be replaced, wasn’t it built to be robust?’” Vaughn said. “It was. You’d like to say it’s built for a 50-year lifespan, but in that environment, 30 years is pretty good.” 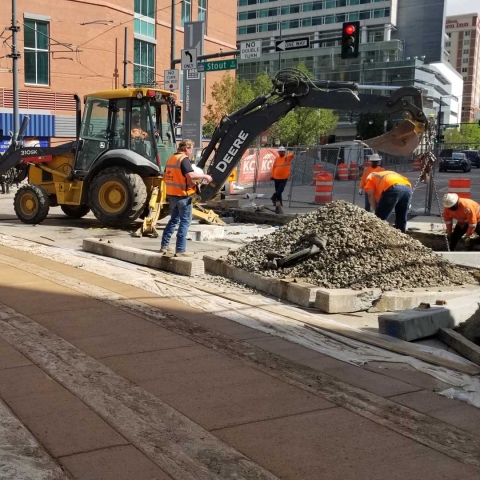 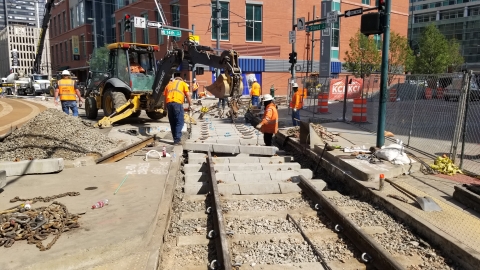