Public health officials are increasingly optimistic that passengers can return to public transit without risking exposure to COVID-19 transmission, including RTD, as it reinstates front-door boarding and fare collection on its metro system.

International studies on COVID-19 transmission pathways have not pinpointed clusters of cases related to public transit use, according to national publications like The Atlantic and Bloomberg City Lab. Locally, there have not been clusters of cases in riders or RTD operators that should concern potential riders, public health officials said, as long as passengers and employees consistently follow guidelines.

“I think mass transit is a perfectly safe alternative if we as individuals and as a community do the basics,” said Dr. Bill Burman, director of Denver Public Health.

Those “basics,” according to Denver and state health officials, include:

“The basics work,” Burman said. By abiding by the guidance on this list, he added, “it’s quite reasonable for people to use mass transit.”

Burman and other metro Denver leaders have reviewed both local evidence and the experience of major transit systems around the world, and found that transit is not a dangerous vector as once feared.

An article in The Atlantic noted a “lack of evidence that public-transit systems have played a role in COVID-19 transmission – and a growing body of research pointing in the other direction.” Further, according to the magazine, “A recent study in Paris found that none of 150 identified coronavirus infection clusters from early May to early June originated on the city’s transit systems. A similar study in Austria found that not one of 355 case clusters in April and May was traceable to riding transit.”

The clusters studied in Paris largely came from other frequently cited risky spaces, including healthcare facilities, workplaces and homeless shelters – “all sites where people mix in enclosed spaces for long periods of time and, in the case of hospitals, where people who are already infected are likely to congregate.”

Bloomberg City Lab noted that in a study of almost a month of French cases, “not a single COVID-19 cluster had emerged on France’s six metro systems, 26 tram and light rail networks or numerous urban bus routes.” A study of Japanese virus clusters also found none emanating from Tokyo’s “famously packed” commuter trains.

RTD’s system may have an even bigger advantage in that it does not operate underground, tightly enclosed subways, Burman said. Subways remain a higher concern because of lack of air circulation on platforms or in trains, while RTD’s buses and rail cars operate above ground and allow for windows and doors to be opened, for air circulation.

“The information emerging from around the world is encouraging, and RTD is aware of it as we work closely with peer transit agencies to share the lessons we’re learning and our best practices,” said Mike Meader, RTD’s chief safety and security officer and assistant general manager of safety, security and asset management. “To ensure an appropriate response to the coronavirus, we continue to follow the guidance of the World Health Organization, Centers for Disease Control and Prevention, the Colorado Department of Public Health and Environment, and the Denver Office of Emergency Management.”

As RTD prepares to get the region moving again, the agency is taking additional steps to make travel as safe as possible. Buses are currently being retrofitted with shields between operators and passengers boarding from the front, a process that will be completed in the coming months. In addition, RTD continues to broaden its supplies of personal protective equipment, from face coverings provided to drivers to sanitizing and cleaning supplies. 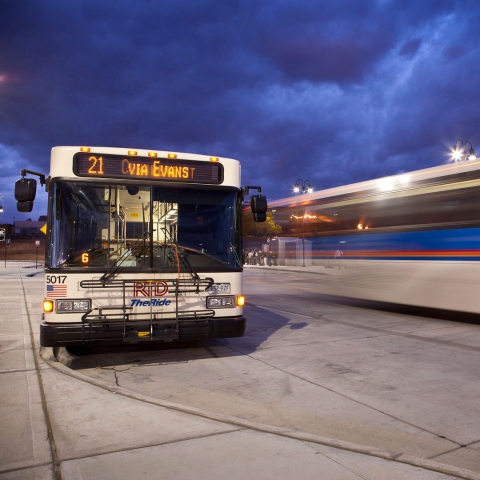