This New Year’s Eve, free rides will be available on all Regional Transportation District (RTD) bus and rail routes, as well as Access-a-Ride and SkyRide services, starting at 7 p.m. Dec. 31 through 7 a.m. on New Year’s Day.

The free rides are made possible by a partnership now in its 12th year involving RTD, Coors Light and Coors Distributing Company, to encourage Denver residents and visitors to celebrate responsibly. Since the program began in Colorado, more than 1.6 million safe rides have been taken.

Across the country, the program has provided safe rides since 1987 to more than 6.7 million people in 28 communities. In addition to Denver, free rides on New Year’s Eve will be offered this year in Chicago; Dallas; Milwaukee; Minneapolis and St. Paul, Minnesota; and Phoenix.

RTD riders can plan their trips and look up route and schedule information at www.rtd-denver.com.

Revelers headed downtown should be aware that changes to rail service will be in effect on New Year’s Eve. Between 8 p.m. until the crowds dissipate after the midnight fireworks show, no light rail trains will cross 16th Street, and L Line service will be suspended. Between midnight and 2 a.m., additional train trips will be added on all downtown lines (i.e., C, D, E, F, H and W). More details about these changes, including a map showing affected areas, is available here.

Additional commuter rail trips have been scheduled to depart Union Station in the early morning hours of New Year’s Day on the University of Colorado A Line, the B Line and the G Line. 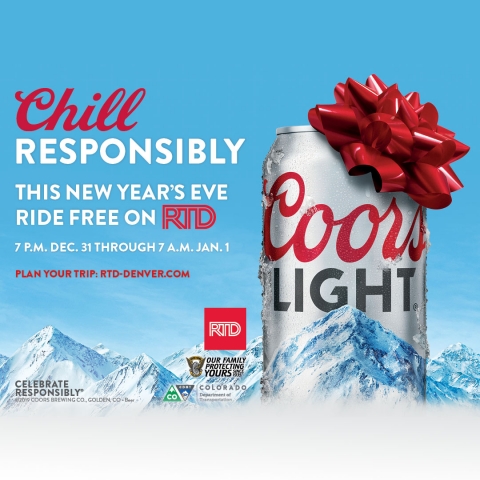