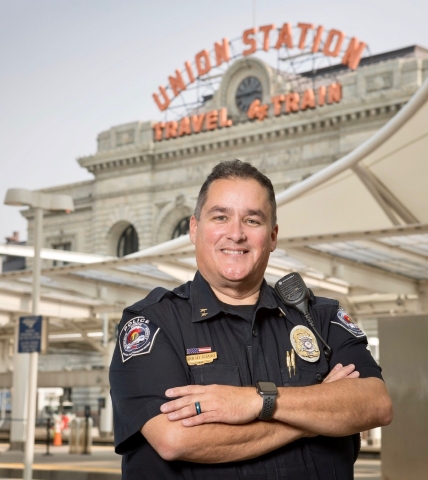 After an illustrious 12-year career with RTD, five of those serving as Chief of Police and Emergency Management, Robert “Bob” Grado is stepping down to pursue other endeavors.

Grado started his career in law enforcement at 14, as a Police Explorer Scout for the San Bruno Police Department in Northern California. He moved to Colorado in 1984, when he joined the El Paso County Sheriff’s Office as a deputy sheriff. Grado also served as a police officer for the Monument Police Department for 20 years. During that time, he founded his own company, which designed and installed life safety integration systems in commercial businesses across multiple states. “I was kind of a ‘Swiss Army Knife’ cop with decades of service to law enforcement operations and physical security systems,” Grado said.

In June 2010, Grado moved to Denver to join RTD as a Police Commander, responsible for overseeing emergency services for the agency. A man of many hats, Grado was responsible for multiple teams and programs such as Public Safety Dispatch, Video Investigations, Transit Watch, Access Control and Closed-Circuit Television. He also oversaw the technology team within Capital Programs that developed and maintained the life safety systems across the agency. Additionally, Grado was tasked with overseeing the Emergency Operations Coordination (EOC) for RTD leadership. Seven years later, in March 2017, Grado was promoted to Acting Chief of Police, becoming the permanent Chief of Police and Emergency Management in July.

As Chief of Police and Emergency Management, Grado led a number of initiatives, such as numerous Transit Watch programs and creating a comprehensive recruiting, testing and background investigation program for prospective hires. He expanded training for RTD Transit Police officers and created a process to formalize video investigations, resulting in millions of dollars in agency liability claim savings and high-quality criminal investigations.

Reflecting on his time with RTD, Grado says his most cherished memories with the agency involved the diverse people he worked with.

“I have had the opportunity to work with incredibly talented genius level engineers on technology projects, and had the opportunity to pioneer new technology and incident management programs that have been duplicated and recognized around the world,” he said. “I have also fond memories of the relationships that I have built with my incredible teammates and within the communities that RTD serves. It has been amazing to be part of leaving our mark in transit and being the team that our peer agencies call for advice.”

Grado leaves RTD and the public sector after a 35-year career in law enforcement. “I am so thankful to RTD for the opportunity of a lifetime to serve as the chief for this division,” he said. “What a ride it has been. I gave 100% effort every day to provide a supportive and learning culture for teammates. I will always think fondly of these great public servants.”