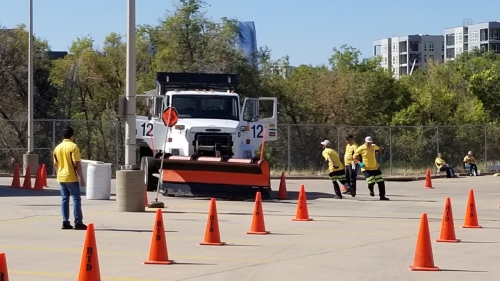 While the first snowfall of the season could still be many weeks away, some among us think about snow all the time: how it falls, how it behaves, how we maneuver through it. One fun way to demonstrate such knowledge is through RTD’s snowplow roadeo, which drew 12 two-person teams to District Shops last week to complete written and diagnostic tests, plus a series of nine driving exercises, for both single- and tandem-axle plows. First-place finisher teams Leo Dowd and Martha Guzman (tandem) and John Prather and Dave Johnson (single) are headed to the 2021 Western Snow & Ice Conference and National Snow Roadeo in Loveland later this month, placing them in competition with teams from snowy places like Minnesota and Chicago.

General Manager and CEO Debra A. Johnson drove the course with Henry Stopplecamp, assistant general manager of capital programs. She told roadeo participants that what they do is challenging, said facilities maintenance manager Ron Posey, and that she has a newfound respect for their hard work. The event is an important means of showing employees that the agency – and the community – value their skills, Posey said.