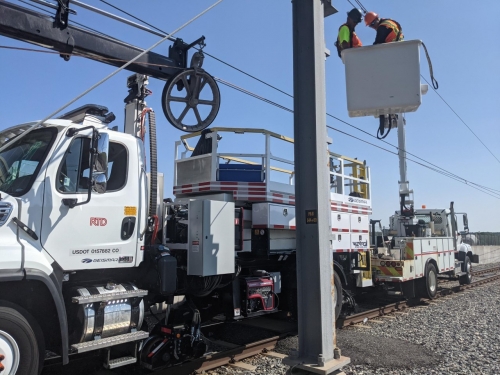 On July 2, a Regional Transportation District (RTD) light rail train encountered low-hanging wires near Dayton Station in Aurora, caused by a failed insulator. The pantograph on top of the train hooked the sagging wire, pulling it down and causing significant damage to the line’s overhead catenary system (OCS) in that location. The downed lines impacted service for the H and R light rail lines.

Repairing the damage, including replacing 2,100 feet of contact wire (the wire that meets the pantograph), messenger wire (the top wire, also called catenary wire) and insulators required an effort beyond anything RTD’s Maintenance of Way team has undertaken in the 27 years since the agency began operating rail.

Karl Shoemaker, RTD general superintendent of light rail infrastructure, said, “Our guys have done a lot of wire work in the past, and contact wire is typically a component of that. In this circumstance, the amount of damage required everything to be rebuilt or replaced.”

To further complicate matters, Shoemaker reports that, like other segments of the industry, the agency is experiencing a shortage of signal/traction power maintainers. Staffing levels for his team are currently down by one-third. “It’s difficult to get folks,” he said, adding that assembling enough crew members to diagnose the situation and make repairs was made especially challenging since the damage occurred on a Friday night at the start of the July 4 holiday weekend.

A team of 30 people, many of them shouldering 12-hour shifts, worked nonstop for over a week to get the system back up and running. Shoemaker credits the team with persevering through record high temperatures, thunderstorms and unexpected equipment failures to successfully return the H and R lines to service.

The project was also made possible through extensive coordination with RTD’s bus operations division, which provided bus shuttles in place of rail service at three affected stations. When such a request for help is made, said Tim Lucero, general superintendent of street operations, the agency must evaluate whether it can provide the staffing and resources – operators and vehicles – necessary to support the work in a manner that is meaningful to customers. Each day in this case, Lucero said, RTD enlisted the help of six street supervisors to guide operators and passengers, and between 16 and 18 bus operators were called upon to assist.

“People performed amazingly, and they came together and made it happen,” Lucero said, calling out “the amount of resources and the dedication that it took from the team to get this done for our customers – and to get it done during a challenging time.”

Shoemaker and his team continue to investigate what caused the wires to sag. Initial evidence points to corrosion and failure of an insulator from magnesium chloride used in de-icing of the interstate that runs alongside the alignment.

“This is the first failure we have had of this kind,” Shoemaker said. To guard against future events, a plan is being formulated to go into the field and do failure tests on other wire insulators. The insulator that failed was approximately 15 years old. Typically, he said, insulators are made to last approximately 25 to 30 years.

Shoemaker noted that this type of incident does not pose an inherent safety threat to the public. “When the wire breaks,” he said, “the (transit power) substations can detect the fault and de-energize the wire automatically.”