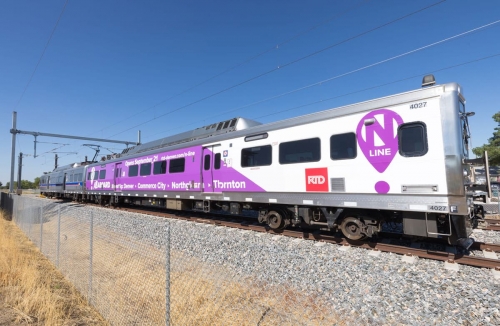 RTD celebrates completion of one year of operation for its N Line commuter rail service. Since beginning operations on Sept. 21, 2020, N Line trains have traveled more than 310,000 in-service miles between Union Station and Eastlake•124th Station in Thornton.

On Tuesday, Sept. 21, RTD will host a customer appreciation event handing out masks and hand sanitizer on the N Line platform (track 2) at Union Station, 4-6:30 p.m.

The N line is a visible symbol of progress and growth for the North Metro region, attracting new businesses and encouraging transit-oriented development. The line, which serves Denver, Commerce City, Northglenn and Thornton, is the first commuter rail service operated by RTD. Denver Transit Partners operates RTD's three other commuter rail lines: the University of Colorado A Line, and the B and G lines. The agency continues to maintain and operates its own light rail and bus service.

Like all FasTracks commuter rail lines, the N Line features wireless positive train control (PTC) technology as a key safety precaution. The complex system was built into the new rail to reduce the risk of catastrophic train accidents. RTD is the first transit agency in the United States to build PTC technology into a new rail system from the ground up.

A year in, RTD reports that N Line service availability and on-time performance are consistently above 90%, which is a good place for a new railroad to be in, according to RTD Deputy Assistant General Manager for Commuter Rail Allen Miller. “For a new railroad to open up with Positive Train Control in the U.S. and still maintain those numbers, is impressive,” he said.

Miller notes that seven railroads around the country have opened with the new PTC technology and are running in the 70% to 90% range for on-time performance. “We have consistently stayed above 90% since its opening in September of last year,” he said. “Our goal is to maintain that level set by the standards and exceed it on a daily basis. So far, my team has been doing that.”

The corridor will eventually extend to North Adams County and include two additional stations. The remaining 5.5 miles of the corridor will be built as funds become available. The entire 18.5-mile N Line is part of RTD’s 2004 voter-approved FasTracks program to expand transit across the Denver metro region.

Per federal mandate, a mask is required while riding on or waiting for RTD vehicles.