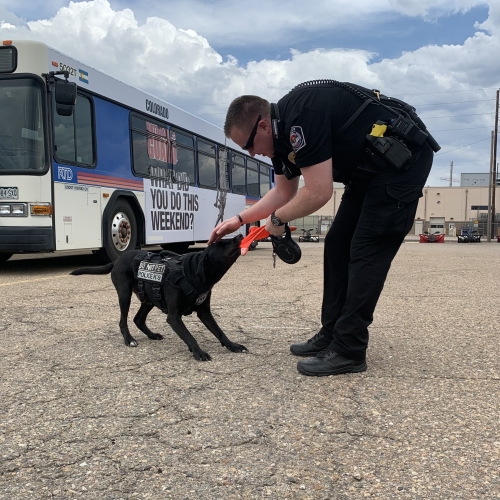 The crime scene already had been processed and washed with water when RTD Transit Police Officer Corey Averill and his canine, Max, arrived in Longmont last fall to assist that city’s police department with a homicide investigation. About 30 hours before, a postal worker had been fatally shot by an ex-girlfriend while sorting mail at a bank of mailboxes at Heatherhill Street and Renaissance Drive. Longmont Police had located three of the five shell casings used in the crime. At the department’s request, Averill and Max were brought in to find the last two casings.

Two minutes after he began searching the area in question – which included a sizeable memorial of fresh flowers, homemade posters and candles – Max gave his first alert, homing in on a casing pressed into the grass behind the mailboxes. Four minutes later, he alerted on a mailbox that was locked and sealed and had already been searched. When the box was unlocked, the second missing casing was revealed inside.

The work of this police canine team had been recognized at a regional level by the National Police Canine Association (NPCA), a nonprofit dedicated to the training, development and certification of law enforcement canine teams and their administrations. On Aug. 23, at the organization’s national training seminar, Averill and Max’s work in Longmont will be honored as the 2021 detection case of the year – an award chosen by current and retired handlers with decades of experience. “This case,” said Katy Farnsworth of the NPCA, "stood out to the Board."

“I was so excited, because it is a pretty big award,” Averill said. “I never thought Max would get selected for something like that, so I was ecstatic. I was very happy for the little guy.”

Averill and Max are one of two canine teams RTD employs in its work, and their focus is on RTD’s buses. (The other team, Sgt. Amy Homyak and Thor, are assigned to RTD’s trains.) The teams are called on as needed by police agencies within RTD’s service district to assist with investigations. Averill recalls helping Thornton with a bomb threat at a Walmart, and Commerce City with a bomb threat at an elementary school. Max is often used to investigate unclaimed bags on RTD vehicles or properties. Fun fact: His training enables Max to identify distinct odors in a dozen different chemical families, enabling him to detect more than 600,000 different types of explosive combinations that a person could make. 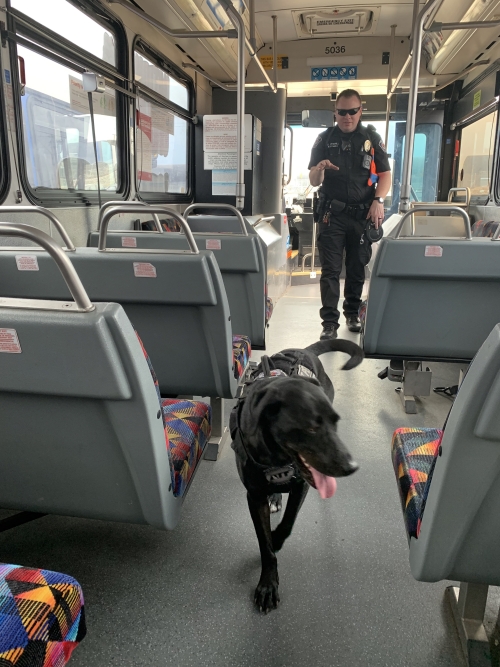 When Longmont called, Averill said, “I was like, man, I don't know. It's going to be a tough search. Shell casings on their own are pretty hard to find, because there's not a lot of odor coming out of them.” He marveled that Max found both in 6 minutes.

Max, a Labrador Retriever, came to RTD from a breeder in Mexico when he was about a year old. He is the third police canine to work with Averill, who joined the agency two and a half years ago from the Auraria Campus Police Department. The pair is part of the Front Range Explosives Detection K-9 Group, a collection of local agencies that have police dogs and train weekly. “If a call comes out, we'll be able to respond together,” Averill said. “The dogs know each other because it takes a lot of dogs to search a big area.”

Police dogs like Max bring unmatched value to public transportation, with no existing technology coming close to replicating the ability of a trained animal’s nose, he noted. Dogs are mobile and can cover a lot of ground quickly. Averill likens Max to the Army’s Special Forces, given the specialized training he carries.

“How we see in 3D, dogs can actually smell in 3D,” Averill said. “Each nostril is independent of the other, and they can actually tell which direction the odor is coming from, like a 3D picture with their nose. It's incredible.”