RTD today announced the appointment of Dr. Joel Fitzgerald Sr. as the agency’s next Chief of Police and Emergency Management, a role that carries primary responsibility for customer safety and security across the eight counties and 40 cities of the Denver Metro region in which RTD operates. 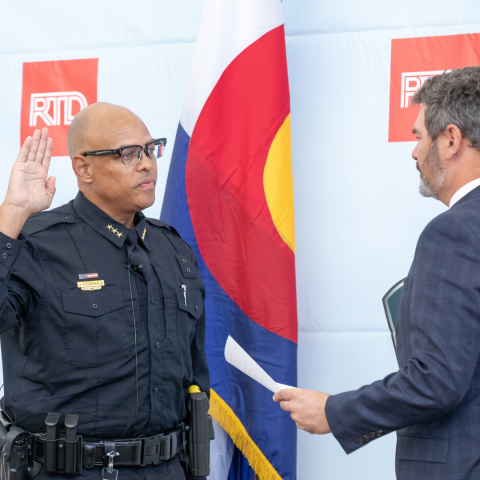 Fitzgerald’s three decades of law enforcement experience include serving as police chief in four U.S. cities. He was sworn into his new position this morning at a ceremonial event at Denver Union Station that featured remarks by RTD General Manager and CEO Debra A. Johnson and Board Chair and District J Director Vince Buzek. The new Chief of Police and Emergency Management was selected following a nationwide search. Fitzgerald succeeds Robert (Bob) Grado, who stepped down from the role in March, and Deputy Chief Steve Martingano, who served as Interim Chief during the intervening time.

While his municipal law enforcement experience strengthened partnerships with transit agencies in other cities, leading a transit police agency is something he had not yet achieved in his career as a police chief, Fitzgerald said. The opportunity to lead a division that serves so many people and plans to grow appealed to him. Customers must feel safe and secure while riding the RTD system, he said.

“I am a person of integrity, and I care about the people we serve,” Fitzgerald said. “I set expectations high for interactions with people. It is important to be someone who beats crime and builds legitimacy and trust in the community.”

In each of the four positions where he served as police chief, Fitzgerald’s selection was the result of a competitive national search, and each of the appointments made him the first African American to serve in that rank in the history of each organization. As a result, General Manager and CEO Johnson noted, his career reflects a commitment to integrity, conceptual leadership that promotes procedural justice and evidence-based strategies to abate crime.

“Joel is a courageous leader,” Johnson said. “He builds coalitions, he is focused on strategic planning and he has expanded community policing everywhere he has served – all elements that are important to RTD. He is committed to the betterment of the community in his approach.”

The organizational direction Fitzgerald has demonstrated, Johnson added, “is grounded in the sanctity of life and other tenets of 21st century policing, to shift police service delivery to more inclusive models that address the diverse needs of all stakeholders while concurrently enhancing public safety.”

Fitzgerald has been a member of professional associations that include the Major Cities Chiefs Association, the National Organization of Black Law Enforcement Executives, the Police Executive Research Forum (PERF), the National Association for the Advancement of Colored People, and the International Association of Chiefs of Police. He is a graduate of Harvard University’s Senior Executives in State and Local Government program, the FBI National Executive Institute, Northwestern University’s School of Police Staff & Command, and PERF’s Senior Management in Policing program.

In 2019, Fitzgerald became an elected member of the Federal Bureau of Investigation Law Enforcement Executive Development Association Board, for which he now serves as Second Vice President.

Joel and his wife, Pauline, a Special Crimes-Homicide Detective for the Tarrant County (Texas) Office of the Criminal District Attorney, have three children, one of whom is a police officer in Philadelphia.

Fitzgerald described himself as a believer in taking a “firm compassion” approach to policing. He noted that his prior experience “has been working in communities that don’t like the police and building presence. Here, people support us but want more presence.” In every department he has led, he said, he improved retention, policy and procedures. Fitzgerald oversaw Fort Worth’s Police Department accreditation in one year, and he would like to pursue statewide accreditation for RTD’s Transit Police division. Ultimately, Fitzgerald would like to see the division become “the place where police officers from other departments want to serve.”