The Regional Transportation District (RTD) today welcomed new CEO and General Manager Debra A. Johnson, an executive who brings more than a quarter-century of leadership experience honed at some of the largest transit agencies in the country. Johnson – the first woman in this role in the agency’s 51-year history – takes the reins during a transitional year for RTD, with service changes and budget challenges brought about by the pandemic.

Johnson’s first day included early-morning visits to RTD’s operating divisions and a virtual meeting with all of the agency’s employees. In introducing Johnson to RTD’s employees, Board of Directors Chair Angie Rivera-Malpiede spoke to Johnson’s enthusiasm and said that she and her Board colleagues “are absolutely thrilled to have Debra at the helm of our agency.”

“We really needed to get a leader who would be innovative, creative, think outside of the box, partner and have lots and lots of transit experience,” Rivera-Malpiede said, “and we found that in Ms. Johnson.”

During the agencywide address, Johnson told employees that they should expect to see her across RTD’s system as she embarks on a learning phase that includes assessment, evaluation and research, and that she will be listening carefully to what employees have to say. She said that she believes RTD is on the cusp of making great strides. She noted that she understands from personal experience how important public transit is, having relied on it while growing up and not purchased a car until she was an adult. Johnson said she looks at service delivery foremost from the customer perspective.

At a virtual news conference this afternoon, Johnson told those listening in that, as she shepherds RTD over the course of the next several years, “I have a responsibility to ensure that I work collectively with all the stakeholders, with our customers and, most importantly, with our employees to make this organization the best that it possibly can be.”

Johnson referenced a finding from a Pew Research Center study, that 54% of transit ridership across the country constitutes single mothers of color. As a black woman, Johnson said, she is mindful that transportation helps to unleash people from limitations they may have in their lives. She added: “Recognizing that oftentimes in this country, decisions are made by others that aren’t in that demographic, it’s extremely important to me, and I recognize that I have the responsibility to move us forward.”

The pandemic has highlighted the need to be flexible and agile and acknowledge what we don’t know, Johnson said.

“COVID-19 has brought things that we wouldn’t think we would see in our lifetime. Recognizing that I’m a person in the people business and I enjoy being a servant leader, it’s important to me that we are moving essential people to get them where they need to go,” Johnson said. “But I would be remiss not to recognize that we have essential employees that are making that reality day to day.”

Johnson joins RTD from Long Beach Transit, where she served as Deputy CEO of the Southern California agency from May 2014 to October 2020. Full details about Johnson’s background, experience and philosophy, as well as the video from today’s news conference, are available on the CEO and General Manager webpage.

Starting tomorrow on the News Stop, the agency’s digital newsroom, RTD will publish a Q&A conversation with Johnson on several topics – including transit equity, her prior experience and her approach toward her work – over multiple days.

Johnson succeeds Chief Executive Officer and General Manager Paul Ballard, who led RTD on an interim basis since February. He oversaw the agency throughout the pandemic to this point and during the opening of RTD’s newest commuter rail line, the N Line, in September. 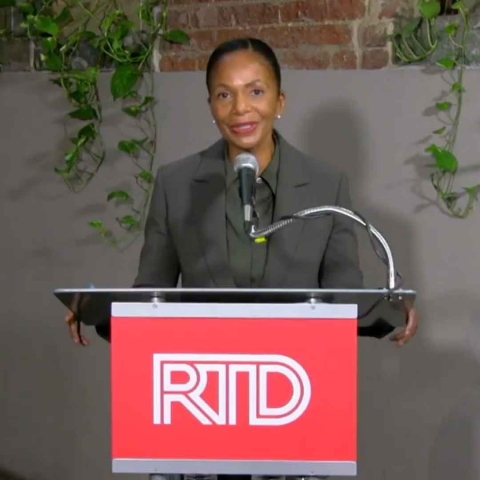