While RTD’s choices of routes to consider reducing may seem cold or arbitrary to the communities and commuters losing service, the recommendations are made by professional planners who know precisely what pain their proposals will cause.

With RTD’s Board of Directors expected to vote next month on proposed service changes that would take effect in May, the agency is once again explaining how route analysis is done, and all the service, legal, financial and geographic factors that play into a decision.

Planners hate targeting routes and train lines for reductions. But when the overall system is strained to the breaking point by operator shortages eroding public confidence, they at the very least want to recommend changes where they make the most sense.

So how do they start? Let’s take a look, in a discussion with RTD’s Jeff Becker, a civil engineer with a 25-year career in transportation planning.

A frequent question from RTD riders asks why the agency would modify or eliminate routes when doing so gives up revenue from paying passengers. A crucial fact to start with in all RTD planning is that every single rider, on every single trip, on every form of RTD transportation, is subsidized by taxpayers. No route or line pays its own way with fares.

It’s a shock for many people to learn: Some routes come closer to breaking even than others, but subsidies range up to $15 per rider and beyond. No major transit agency in North America pays its own way in fares. In RTD’s case, the gap between fares and costs is made up by sales taxes and federal grants.

But the amount of subsidy per line or per rider is only one of many factors planners consider. Others include:

At other times in its history – after the 2008 U.S. economic crash, for example – RTD service changes may have been focused on saving money or other issues. The service reduction proposal for May was all based on “saving” operators, so that fewer trips would be canceled at the last minute and fewer operators would be mandated to work six-day weeks to cover shortages.

Looking at particular routes in the current proposal, Becker said, those savings start to shine through.

The Free MallRide is popular, but its 90-second frequency at peak periods demands a lot of operators. Changing the frequency to every 3 minutes will save a precious 7.6 operator positions. Moreover, passengers have alternatives, in either waiting a couple of minutes for the next bus or walking along the 16th Street Mall. 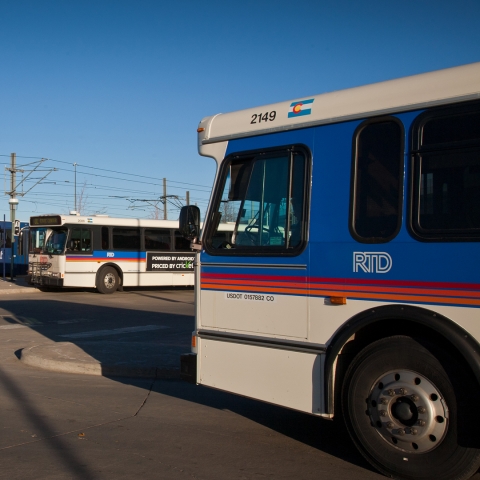 The 16L, running with limited stops along West Colfax Avenue, was another logical choice for the recommended slate of changes. The 16, with more stops and less convenience for long-distance commuters, nevertheless runs frequently on the same route. And discontinuing the 16L would save 9.6 operator slots on a weekday – the highest workforce savings in the proposal.

Becker reiterates that everyone involved in planning at RTD knows the proposed changes cause problems for riders. They’re necessary because six-day mandating creates unhappy operators who leave RTD, which then causes even more mandating to cover greater shortages.

“When you’re in a vicious cycle,” Becker said, “generally you have to do something that causes you a lot of immediate pain, but relieves the pain over time.”

And, Becker concluded, he and his planning colleagues know that every recommendation they make has to survive months of public comment, lobbying by riders and local officials, and scrutiny by the geographically-elected 15-member board.

“We go through service changes three times a year, and we’ve never done one where there were not changes to the proposal,” he said.