All passengers are required to wear face masks on RTD services. Capacity is limited to approximately 15 passengers per bus, 20 on larger buses, and 30 riders per rail car. If you are unable to maintain social distancing (6 foot spacing), do not board. Instead, wait for the next vehicle.

You are retiring from RTD today after more than two decades with the agency, during which a lot has happened. Which moments will remain with you, and why?

During 2003 and 2004, RTD was reviewing a potential expansion plan. At the outset, it was simply referred to as “The Big Plan.” Ultimately, it became FasTracks. On the night of the 2004 election to raise RTD’s ability to collect additional taxes to fund the projects in the plan, the waiting was electric. Some people had their laptops and were monitoring the election results, while others milled around with a drink in hand. When it became clear that the ballot issue had passed, the celebration went wild. All the people who had worked so hard on the campaign were cheering and clapping. What a night!

You had been working in a different industry before joining RTD. What was that experience like, and what did you learn?

I came to RTD from the hard rock mining industry – a Canadian gold mining company with its U.S. headquarters in Denver. I began going to Washington, D.C., with a group of women in the industry to lobby for the mining laws in effect at that time. It was a whole new world for me – being on the Hill and talking with U.S. Representatives and Senators and their staff. I quickly learned the importance of talking points and the protocol for working on the Hill. These visits were the beginning of forming working relationships with congressional staffers and the members of Congress.

What initially led you to government relations work? What has kept you engaged in it?

As mentioned before, I began my work in the mining industry. Although my company had no properties in Colorado, I spent considerable time in Arizona working with that congressional delegation in relation to permitting a copper mine. Between Washington, D.C., and Arizona, I developed a real commitment to the efforts to educate our elected officials on the benefits of our natural resources. The same enjoyment has translated to the world of transit.

You have said that it helps to be helpful to people. How does that thought apply to your work? What qualities are necessary to be a good government relations officer?

One of the key roles of a government relations officer is to know as much about the industry you’re representing as you can so you can impart that knowledge to elected officials who may not be familiar with the issues connected to that industry – in our case, transit. Another is being willing to ask for assistance from individuals who are more familiar with the fine points of any given issue (e.g., cost of fuel, safety requirements, financial impacts of a piece of legislation). Being responsive to telephone calls and requests is also key to being a good government relations officer.

Do politicians understand the challenges and opportunities in public transit?

Sometimes politicians have so many issues that they have to be familiar with that they may not know about the importance of public transit. Education is the key. There are industry organizations that cover facts about public transit, and to utilize that information makes everyone’s job easier to relay that information to our elected officials – whether at the local or federal level. Sometimes these officials may introduce legislation that has a negative impact on our transit operations, and it’s important to get input from our staff in the affected area and then pass on the information to the bill sponsors and our lobbyists. RTD has the benefit of three excellent external lobbying teams who assist in carrying messages to legislators. Part of my role is to make sure our lobbyists understand the impacts of legislation so they can also convey the message to the legislators.

Have different administrations – or different economies – made a difference in the funding RTD has received and relationships it has had?

Yes, different administrations and different economies can make a difference in the funding that RTD receives. The quality of the projects also makes a huge difference in receiving federal grants. The Federal Transit Administration (FTA) and the Federal Railroad Administration (FRA) have specific criteria that a project must meet in order to qualify for federal funding. Some administrations are more friendly to public transit than others, but the education process for our elected officials stays the same and is critical to advocating for our projects.

What will you miss about your work? What are you looking forward to in retirement?

I will miss the opportunity to work with our incredible planning and financial staff and others in the agency. I could not do my job without the input and assistance from other departments within our agency.

We are looking forward to travel – both in the United States and abroad (when COVID allows us to fly to Europe). Reading is always something I enjoy, and I will probably look for some more bridge groups to join. We may also take some education courses when in-person attendance is allowed again. Time will tell as to what we end up occupying our time with! 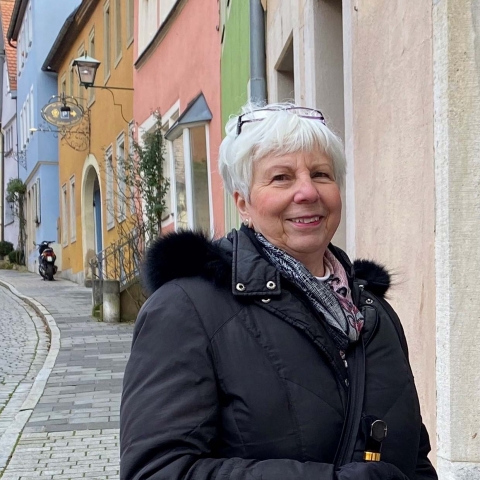