Taking the D Line to an Avalanche watch party? Plan ahead for alternate routes during RTD’s overhead wire work at Englewood Station June 21-22

RTD will perform necessary maintenance that will impact light rail service on the D Line between the Littleton•Downtown and I-25•Broadway stations on Tuesday and Wednesday, June 21-22. 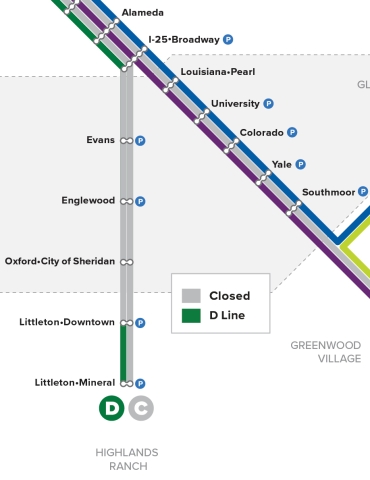 Customers whose trips are impacted by the rail closure are encouraged to park at I-25•Broadway Station Park-n-Ride to access rail service to and from downtown, or explore alternate routes, including bus Routes 0, 21, 51 and 66.

If you are planning to travel downtown to an Avalanche watch party, be sure to use the Next Ride web app to plan a trip and see bus and train locations in real time. Customers are also encouraged to sign up for Service Alerts for specific route information.