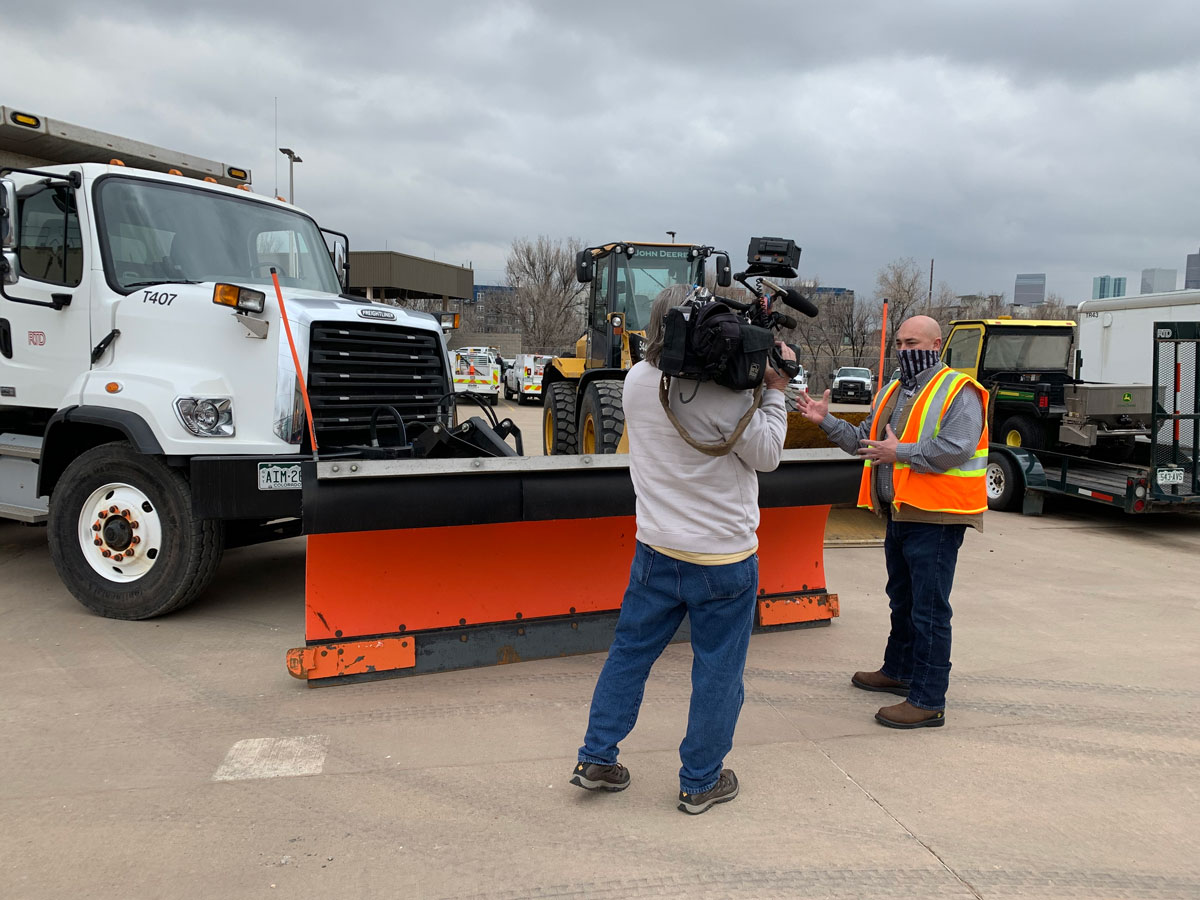 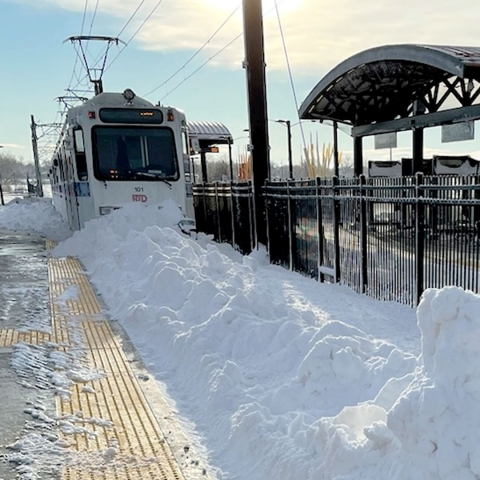 It was all hands on deck this weekend as a blizzard blasted the Denver metro area. RTD management worked all week and weekend to make sure resources were available to our frontline staff so that customers could get to where they needed to go. RTD had to suspend bus and rail service Sunday night and bus service on Monday due to treacherous conditions.

RTD thanks its employees for being out there weathering the storm. The list of appreciation is long and includes bus and light rail and commuter rail operators, leadership from Bus, Light Rail and Commuter Rail Operations, Facilities (Facilities Maintenance Manager Ron Posey is pictured above talking about storm preparation to CBS4 on Friday) and Safety and Security, street supervisors, mechanics, Maintenance of Way employees, Facilities and Service and Cleaning personnel, Customer Care staff, Bus Dispatch, Light Rail control, police officers, transit security officers and safety dispatchers at Security Command Centers.

Stories behind the snow

There were many, many RTD employees who worked in the biggest storm of the season. Here are only a few of the many stories of employees who went above and beyond:

Despite the weather, Light Rail Maintenance of Way (MOW) had the majority of employees show up for every shift and all of the supervisory staff showed up.

They kept light rail in service until service was suspended and kept working straight through to open the following day.

When snow removal contractors dumped snow onto station tracks, MOW stepped up and got the R Line back in service for Tuesday.

Enough can’t be said about what employees did to keep things going.

Commuter Rail Maintenance of Way (MOW) had 19 people (represented and non-represented) covering the shifts during the blizzard. The crews assisted/rescued neighbors to the North Metro Maintenance Facility that had gotten stuck on Steele Street five times, one of which that came within 2 feet of a Steele Street crossing gate mast. Two other rescues were also performed at other locations. Two staff members did become stranded and slept on cots at the office, one of which was put into a hotel the second night.

In addition to the outstanding work that was performed to keep the N Line operational for as long as it was possible, the crews responded on two occasions to issues where snow drifts cover switches causing delays to the operations. Crews adjusted their schedules to accommodate the needs of RTD and commuter rail to recover the service quickly and safely.

The efforts during this challenging event exhibited their commitment to RTD and commuter rail. I am very proud of all the MOW team as well as the Operations team’s selflessness in putting the operations and moving patrons first.

I had 10 people who stayed overnight for 2 nights to make sure we had enough people. They all didn’t question anything I have asked them to do. They all stated "whatever you need from me.” There were several times where plans changed and then changed back. Every single one of my employees did not question, they just pitched in. I really could not have been more proud.

These 10 people did extraordinary things to make sure we could both run service and then get service back as quickly as possible. They were amazing and dedicated.

Maintenance (From Dave Ober, General Superintendent, Bus Maintenance)
I had division manager and assistant division manager, Kevin Prior and Myya Bonner (respectively) at East Metro, that were able to get to the division on Monday, and being shorthanded went out with the mechanics and helped shovel snow and get buses unstuck. They spent the better part of the day going from bus to bus getting them freed up so they could return to the divisions. I thought this was great since being managers they could have stayed in their offices all day, but instead chose to go out with the employees and share the work load.

Dontia Jones, Lead Dispatcher (From Daniel Lamorie, Assistant General Superintendent, Street Operations)
One story I would like to share is Dontia Jones, one of our Lead Dispatchers. Dontia was already planning on working a long workweek due to one of our other lead dispatchers being out on vacation the week of March 14. When the snow began to fall on Sunday, March 14, Dontia did everything in his power to rally the troops and mitigate the stuck bus calls. After it was time to go home Dontia knew that he couldn’t leave his team and chose to stay at work well into the night and subsequent day logging 26 hours. Dontia slept for a little in a quiet room and then assisted with the rescue operations of our stuck fleet. Without the valiant effort from Dontia on the dispatch floor I feel our response to the situation would not have been as precise as it was with all the issues we faced those days.