At Transportation & Construction Girl Day, young women ‘see that the opportunities are endless’ 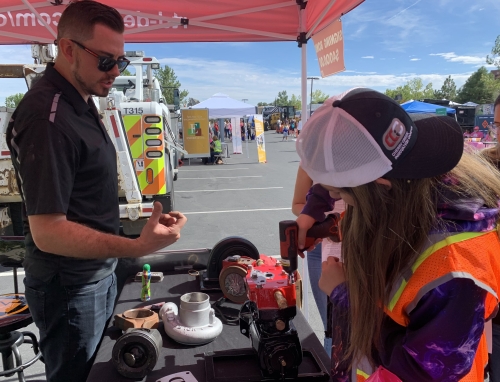 The sound of an impact wrench is unmistakable, calling to mind the “zip, zip, zip” heard in NASCAR pits as crews remove and replace tires as quickly as possible. At the Jefferson County Fairgrounds on Thursday, a steady stream of young women attending Transportation & Construction Girl Day were drawn by the sound to an air compressor RTD had brought – and the opportunity to use the tool themselves, many for the first time.

Marlene of HOPE Online Learning Academy was one of them. The 17-year-old held the wrench steady to remove and reinstall the compressor’s cylinder head, replacing the gasket in between. The compressor is the heart of the air system on RTD’s buses – it builds the air for the brakes, doors and driver’s seat. Technical Training instructor and supervisor Tim Wallace coached Marlene through the exercise, telling her, “Push on the trigger. You got it. You’re ready to go.”

“Usually men are the ones that do these positions,” Marlene said. “I think women should have the chance to be able to do the same things that men do.”

The teenager’s thought is the guiding idea behind the annual event organized by the HOYA Foundation, which this year attracted more than 600 young women from across the region. Transportation & Construction Girl Day has grown since its inception in 2017, both in the volume of attendees and in the number of exhibitors, including RTD. Across the exhibits brought by more than 50 companies, attendees could step into a flight simulator, mix concrete, build circuits, climb into a piece of heavy equipment and try their hand at welding. 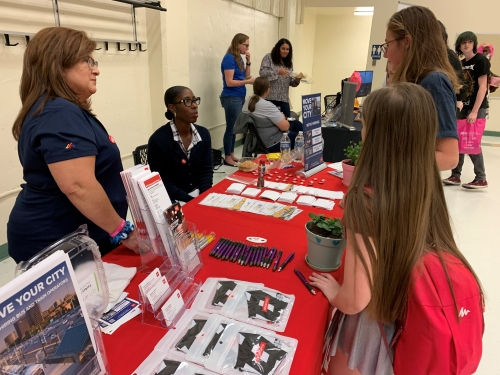 HOYA Foundation Project Director Keller Hayes noted that the event’s reputation has led more schools to support it. Several schools this year brought 40 or 50 young women each, she said. Another – Deer Creek Middle School in Littleton – brought 80. While there has been growth in the percentage of women working in the construction and transportation fields, she said, more can be done to attract women. An event like Transportation & Construction Girl Day introduces attendees to hundreds of career options they may not have considered, she added.

“Everybody says, you can be anything you want to be,” Hayes said. “Well, not if you don’t know it exists.” During the foundation’s annual Career Week for Girls earlier this year, Hayes said it was amazing to see an attendee step out of the simulator RTD uses to train its light rail operators and exclaim, I could do that.

Between guiding girls through their turns with the air compressor, Wallace explained that the path to becoming an RTD mechanic can begin in high school. Do trade or automotive school for two years, he said, and you can join RTD’s DTECH program, a 12-week training course that teaches diesel engines, brakes and air systems. Pass that program, take a test and complete an interview, he said, and “you’re a full-blown RTD mechanic, with starting minimum wage at $30.25 an hour. It’s a great opportunity.”

Many of the young women who spoke with Bodessa Trotman and Rochelle Montez, RTD Human Resources business partners attending the event, expressed interest in welding and construction, Trotman noted. They learned about RTD’s body shop, mechanics, welding and internship opportunities, the latter providing “an opportunity to test drive.” 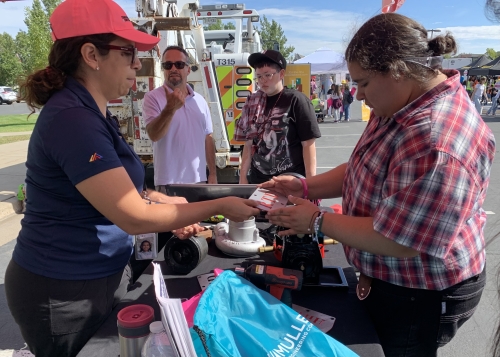 “A lot of them, when you ask the question, what do you know about RTD, ‘Well I know they have a light rail, and I know they have a bus,’” Trotman said. “So we go into the fact that we have two licensed physical therapists, we have whole IT and engineering departments. A lot of them go, ‘Wow, I didn’t know that.’”

She added: “A lot of them come from different communities, and all they know is what they see. To come out to an environment like this, they see that the opportunities are endless.”

After taking a turn at the air compressor, a Thornton High School junior named Alliyah said she enjoyed the experience. “I just love hands-on work,” she said. “I’m a hands-on person, and I like that you can see what you’re doing.”