RTD and the metro region keep the Americans with Disabilities Act a living and breathing document through two committees that continually draw on the expertise and activism of people living with disabilities.

With about a dozen members each, the Advisory Committee for People with Disabilities (ACPD) and the Access-A-Ride Paratransit Advisory Committee (APAC) frequently bring important issues to RTD’s attention that might otherwise have been overlooked. At the same time, they serve as an expert, tightly-networked forum for RTD to bring in challenges, proposals and ideas that could affect service for those with disabilities.

New examples arise at every meeting.

ACPD members let RTD staffers know how difficult the heavy doors made it to move from inside the Union Station concourse to the arriving buses. Building codes did not require accessible door openers, and air pressure and fire codes turned the doors into barriers, committee members said.

“We found the money and we’ve installed them now,” Ed Neuberg, RTD’s ADA manager, said of the push buttons for the automatic doors. The committee’s recommendations literally open doors to all kinds of groups in the community, he noted. “Accessible design helps everybody: mothers with strollers, people carrying heavy bags. They can all just use an elbow now to press a button and get on the bus. That was a great example of collaboration.”

Jaime Lewis, who works on transportation issues for the Colorado Cross-Disability Coalition and chairs the ACPD, mentioned another everyday issue where the group has served as a sounding board for RTD. The transit agency’s light rail platforms have high blocks, or concrete ramps that allow wheelchairs to roll right into the lead car.

People with bicycles or other large objects who are not disabled periodically use the ramps and also fill up the first car that stops at the high block, denying access to the disabled. RTD has been working with ACPD to find ways to keep the ramps and lead cars clear for riders with disabilities, without blocking help for riders needing assistance.

“RTD has been trying different things, different training for conductors, trying to be more strict, so it’s coming along,” Lewis said.

The committee is also working with RTD on the redesign and rebuild of the 16th Street Mall, including discussions about curbless design that might make foot travel harder for people with visual impairment who are used to navigating curbs.

The committee includes both representatives of large organizations and regular RTD riders representing themselves and people with similar points of view. The quarterly forums ensure that community concerns and proposals are heard by RTD, even if no single person or group gets everything they want, Lewis said.

“I’m not going to sit here and say everything we’ve ever brought up has been taken,” Lewis said. “It’s a battle back and forth, but it’s a healthy, respectful debate.”

The APAC’s impact on RTD has run the gamut from helping to pick the most effective and comfortable paratransit vehicles to buy, to pushing for adaptations to software that will allow paratransit users to know exactly when their ride is coming.

In the latter example, RTD was already planning a rollout of rider apps in paratransit to address an ongoing frustration: People who call for Access-A-Ride are given a half-hour window for their ride, and may wait outside in hot or cold weather for most of that period. New software from the vendor allows many riders with disabilities to make their reservation and watch their vehicle move toward them in real time.

But it didn’t work well for the visually impaired. The APAC committee asked RTD to seek changes, but the vendor said they weren’t possible, said Paul Hamilton, senior manager of paratransit services for RTD. But RTD’s in-house IT staff heard about it through the committee and said they wanted to tackle it. And they created a version that worked.

The advisory committee’s point, Hamilton said, was that “even if only 25 to 30 percent of riders use it, we deserve the exact same access, and that’s accurate. And that’s the general mindset, to build a system that provides people with the same experience as if they were riding on a fixed route.”

Even when RTD can’t meet requests, Lewis said, the format and the support of the ADA rules leave people feeling respected.

“One of the nice things about ACPD is if we bring something up and they decide not to act on it, they have to put it in writing why they’re not doing it,” Lewis said. “So it’s on the record, and maybe it’s not financially feasible, and that’s a solid reason.”

The committees are not required by the ADA, Neuberg noted. They keep going because RTD and the disability community have made them valuable. 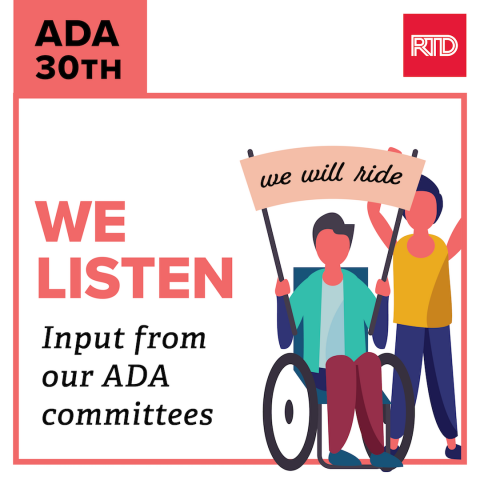