We invite you to take a ride on RTD and get a first-hand glimpse at one of the metro area’s most innovative art collections. This art is featured at our bus stations and various facilities. View the Art-n-Transit map. 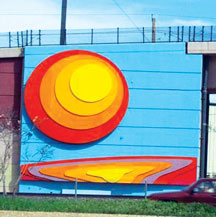 A wall sculpture symbolizes our orbital transportation systems. The travel systems depicted are the earth which travels in its orbit in one day, the moon which circles the earth in one month, and the sun around which the earth orbits in one year. This artwork can be seen by drivers traveling along south Santa Fe Drive at Quincy.
Get there: no transit access 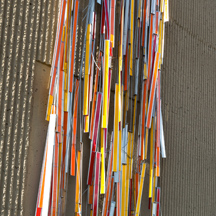 Aluminum strips hanging from the south sides of the light rail bridge over Kipling Street form “curtains” and take on the adjacent ambient light at night. On the north side, above the bike path and facing southbound traffic, the artwork gives the impression of the strips being pulled through the bridge. The art can be seen from Kipling Street at 13th Avenue.
Get there: no transit access 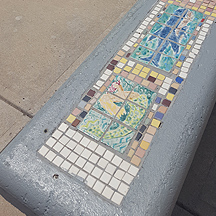 These arc style benches are topped with mosaic tile work and are located in the pedestrian area at Colfax Avenue and Elliot Street.
Get there: check routes and schedules 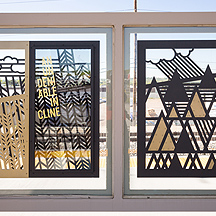 Each station has a set of artwork that creatively depicts a different story, a different aspect of gold. The artwork consists of laminated glass of different colors with sandblasted and in-filled graphics mounted into an aluminum laser-cut frame surround. All panels represent different aspects of gold.
Get there: G 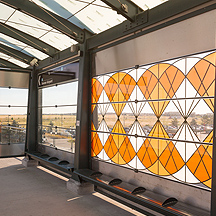 Artist: Sandra Fettingis
Stations: along the University of Colorado A Line
Dedication: 2016

This artwork appears on the windscreens at five stations along the University of Colorado A Line between the airport and Union Station. Each station has the same design, but they have their own color themes to "help to identify stations for commuter rail users and enhance the current colorless, open and industrial landscape on the East Line," explained artist Sandra Fettingis.
Get there: A 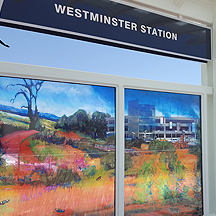 Windscreens contain custom tempered glass with printed imagery drawn from the artist’s paintings.
Get there: B 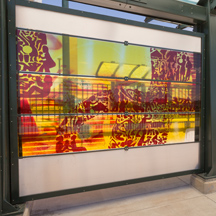 Hand-painted glass windscreens translate to “All Aurora, All the Worlds, All Moving” and reflect the multi-layered and diverse community of Aurora. The Latin phrase can be interpreted in a variety of ways that reflect this multi-layered and diverse community of Aurora. It can represent a new beginning that happens every day on Earth, where every moment can bring light to darkness, and can also be interpreted as the world in a constant state of motion both physically and philosophically.
Get there: R

66. All Is Well Under The Trees 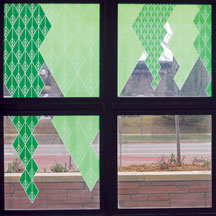 These series of windscreens represent a canopy of vibrant, green and safe trees that invite visitors to stand among them. Each station has been outfitted with unique designs inspired by shapes found in leaves and pine needles.
Get there: E F R 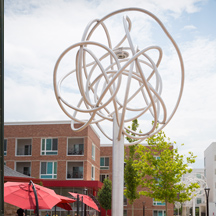 Seven tree sculptures strategically placed create an identity of place, a congruency as one moves through the plaza, and an energetic containment.
Get there: check routes and schedules 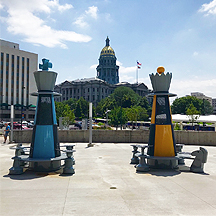 Two statues of chess pieces double as benches and game tables. The sculptures are composed of found objects combined with stock steel shapes such as bar, sheet, and woven wire cloth.
Get there: check routes and schedules 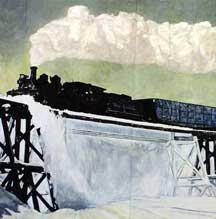 The mural is a representation of a steam freighter crossing a viaduct-type bridge in winter with muted colors of green, blue, and yellow.
Get there: no transit access