“ RELATIONSHIPS CARRY YOU THROUGH.”

Whether commuting to work or planning rail systems, Aprajit “Jeet” Desai is all about connections. 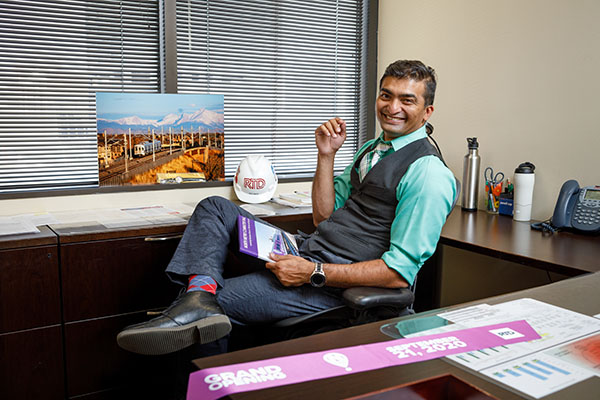 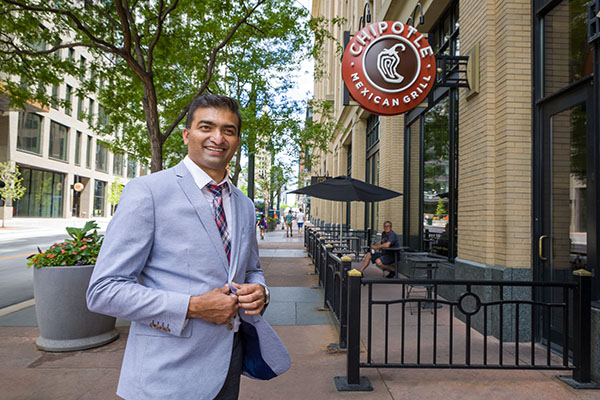 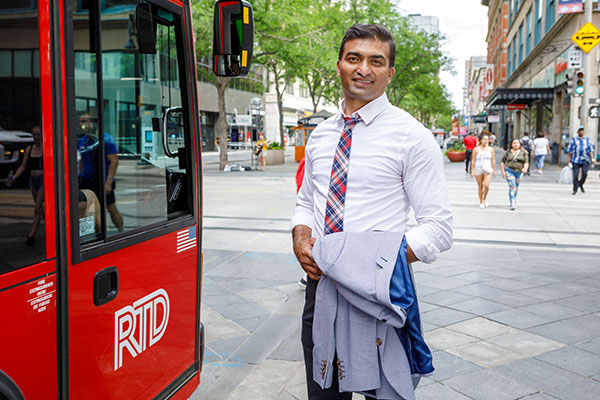 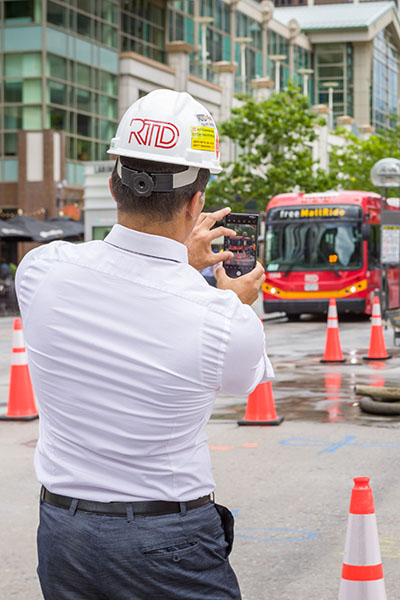 ‘We learn, adapt and evolve’

Aprajit “Jeet” Desai was born in Meerut, a city northeast of New Delhi near the Ganges River in India. From an early age, Desai found himself seeking balance between a science-oriented mother and an artistic father. Desai opted to split the difference, putting him on a career track to explore big-picture technical problems with a creative eye.

“My parents actually made my DNA to accept contradictions and work with extremes,” he joked. (Laughter and Desai go hand in hand.) “I always seek moderation.”

Desai attended high school in Ahmedabad, a southeast city in Gujarat state. He earned an engineering degree from the Center for Environment Planning and Technology, which offered an alternative approach to learning. Desai participated in street theater, protesting government policies, social taboos, high pressure standardized testing, and the Kargil War between India and Pakistan. The theater groups popped up at railroad stations and vegetable markets, demanding attention for their causes.

For his final-year thesis, rather than choosing an engineering topic, Desai shocked his professors by focusing on how the entire city works. His thesis, for which he earned gold medals, addressed solid waste management for Ahmedabad. “If my house is clean but my neighborhood is dirty, it doesn’t work,” he said.

Desai finished his college studies with an engineering degree in December 2000 – weeks before a massive earthquake struck Gujarat, killing 20,000 people and destroying some 350,000 structures. Desai signed on with Oxfam to help with the recovery. He saw barefoot girls carrying huge rocks with their bare hands in 120-degree heat. He saw people in trauma who remained thankful. Desai realized that everyone has something to offer, no matter their outward appearance or apparent status. The experience taught him to always keep his channels of learning open.

Six months later, Desai was on a plane to the United States. Studying for the master’s degree at the University of Texas at Arlington wasn’t easy – in part because of the culture shock and in part because he was broke. A ramen noodle diet dropped Desai’s weight from 200 to 140 pounds. Even buying a $300 car with plywood floorboards, for grocery runs and errands, was a stretch.

However, being dependent on a car motivated him to pursue a career in public transit. Desai’s master’s project explored alternatives of providing public transit in Arlington, the largest city in the United States without such a system. “And they are proud of it,” he said.

Desai met a young woman named Moumita. She was born in Nepal but raised in Jamaica and Belize. The courtship was challenging at first as they both had different personalities and backgrounds. But they soon realized that being different is good, as it provides alternative perspectives, growth and evolution.

Desai’s first full-time job was transportation planner with the city of Wichita, Kansas. Realizing his strong interest in public transit, a friend’s recommendation led to the trip to Denver.

When he walked down the 16th Street Mall for the first time, Desai was awestruck. He admired the wide sidewalks and the throngs of people. He watched the RTD mall shuttle ferry customers from one end of downtown to the other. He wandered the city streets for four hours in sheer excitement.

The sights and sounds of Denver were powerful and inspiring. Watching the street performer Robot Man reminded Desai of his street theater days in India. Desai knew he wanted to work in Denver. He remembered thinking: This was meant to be.

Landing an interview with RTD was such a powerful moment that he hugged the RTD panel members after the interview. “I was just so excited,” he recalled. “They still make fun of me for those hugs after I got the job.”

Desai worked for eight years in long-range planning and then switched to engineering, which led to the biggest challenge of his career. There was a growing realization within RTD that the agency should operate the new 13-mile N Line to Thornton instead of turning it over to Denver Transit Partners, the for-profit concessionaire that operates the University of Colorado A Line, B Line and G Line.

“It was the fiscally responsible thing to do,” said Desai, who credits the visionary foresight of colleagues Henry Stopplecamp and Allen Miller. Desai considers them to be “brilliant mad geniuses.”

Desai was tasked with working on all aspects of running and maintaining the N Line. RTD “wanted to be self-reliant, but due to uncertainties and sensitive cost analysis, we had to keep our work under wraps,” he said. There were 10,000 cogs that needed to work in complete synergy. “We were certain of the next steps, but it was all in theory at that time,” he recalled.

They presented the plan to the RTD Board in October 2017. At the same time, Desai was also taking his PE exam. He was working on all cylinders along with Stopplecamp and Miller, who were easily putting in 100-hour weeks. The internal operation proposal demonstrated an enormous cost savings for RTD. After heavy scrutiny of the proposal, the Board gave its final nod in January 2019. The N Line opened as an in-house part of RTD operations on Sept. 21, 2020. This was a proud day for the agency.

Today, Desai is the business program manager for RTD’s capital programs. He will tell you that means doing a little of everything: active listening, providing council, facilitating teams with decision-making, or improving the transparency of capital programs.

Desai believes he is working alongside giants in public transportation. It’s “relationships that carry you through,” he said. “This is what my past experiences and this position has taught me. Build consensus. Listen. Be open to new ideas – especially if they appear to be contradictory to your point of view. Build alliances. Take no shortcuts. All these things come into play every day,” he said.

“I am demonstrating what RTD is all about – we do not give up,” Desai said. “You can knock us down, but you can never knock us out. We will learn, adapt and evolve.”

That’s the kind of attitude you’d expect from a guy whose first name, Aprajit, means “one who cannot be defeated.” His parents, he says, taught him to embrace this view of the world. “They told me that when you feel out of control, you can always control your outlook about your situation.”

Oddly enough, his nickname has a powerful meaning in the Hindi language as well. 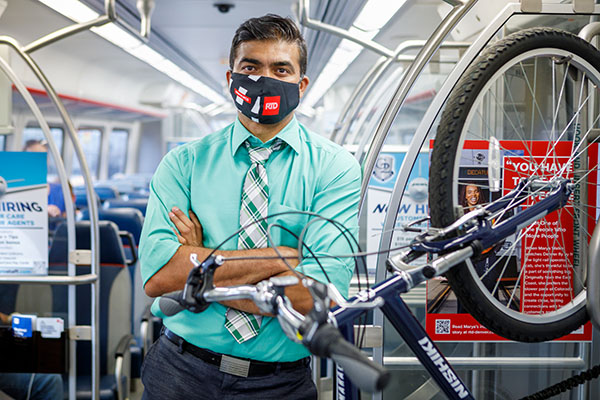 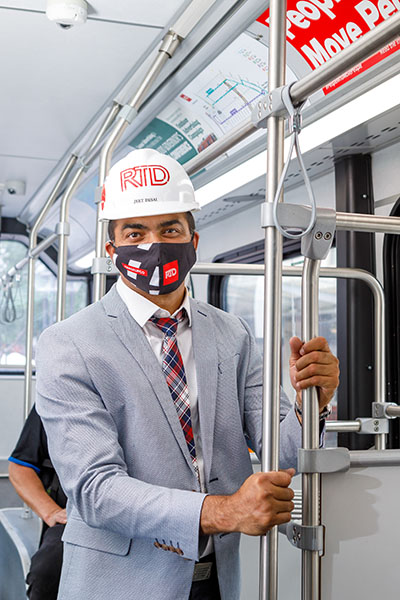