“ PEOPLE TRUST ME WITH THEIR LIVES.”

General Repair Mechanic Helper Emily Abbott knows how and why the bus works, and just as importantly, what the vehicle carries—customers depending on RTD to safely get them where they need to go. 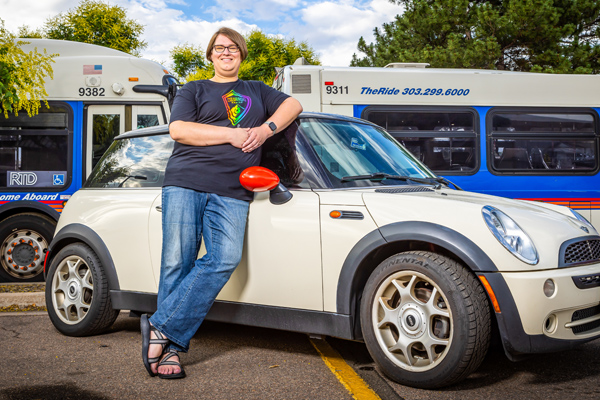 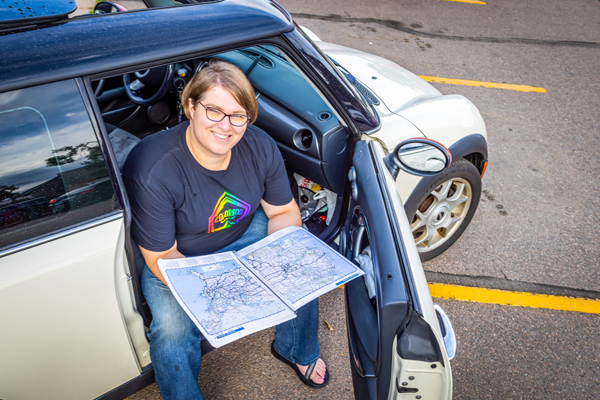 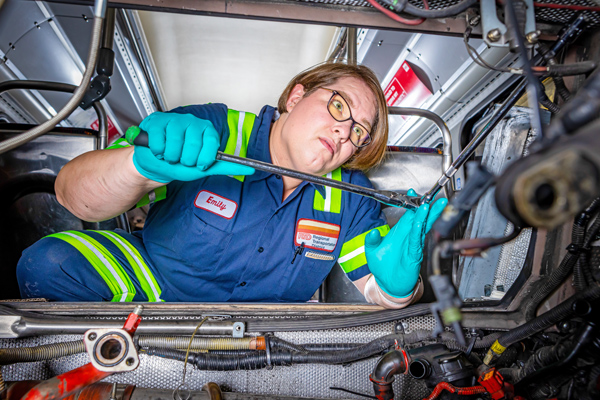 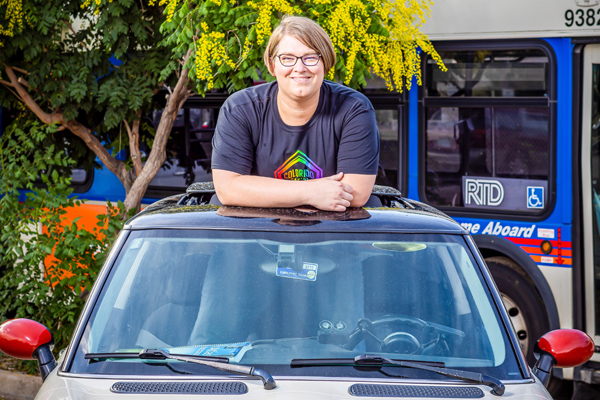 ‘My story is mine’

Three and a half hours from the Denver metro region – up and over Cameron Pass, but not quite to Walden – the sky opens up to reveal more stars than one could ever imagine seeing. To take in this view during a new moon with little light pollution, it doesn’t seem hard to imagine how people centuries ago created fantastical stories of heroes or gods.

Emily Abbott knows this spot. It is one of many pinned on a 3-foot-by-4-foot map of the state in her living room, alongside all the roads and places she has been to – or wants to visit. The Great Sand Dunes is high on her list: Seven hours of driving would be worth it for three hours of stargazing and astrophotography. “To me,” she said, “that’s a perfect use of my time.”

Long drives are second nature to Abbott, who estimates she puts a minimum of 35,000 miles a year on her white 2006 Mini Cooper, some of that commuting, much of it exploring every corner of Colorado. Over five-plus years as a bus operator for RTD, mainly on the Flatiron Flyer and Nederland routes, Abbott carried untold thousands of customers over 8,000-plus round trips – and 400,000-plus road miles. She loved her regulars, she said – the CU students and the commuters, some of whom told Abbott they switched their afternoon schedules to ensure they could catch her bus.

Driving those regional routes, Abbott said, “I would tell people, those buses are the best corner office in the world, because you have the view of the Flatirons coming up over McCaslin and you got a view of downtown Denver as soon as you come onto I-25.” The scenery dropping down into Boulder Valley, she said, “never fails to bring a smile to my face.” Weather, individuals, road conditions and traffic made each trip different.

As of last year, Abbott transitioned into maintenance as a general repair mechanic helper, inspecting and fixing the vehicles she once drove. The perspective she brings as a former operator makes her think differently about her work, she said.

“You look at how many people I probably carried, and every single one of them was trusting me with their life,” Abbott said. “When I was going 65 mph down Highway 36 and pulling into every one of those slip ramps, I was trusting that those brakes were going to stop where I wanted them to.”

She continued: “I like having that knowledge of how things work. This is not just a vehicle – having been an operator, I know what’s on this vehicle.”

Abbott can see the cause and effect of what she inputs, learning about and exploring the systems of which the buses are made. Seeing the relationship between inputs from an operator through all the control modules to various aspects of the buses. Understanding that pushing an accelerator pedal doesn’t just make the bus go faster, but how the control module receives that signal in turn sends out other signals to deliver more fuel. Appreciating that steering the wheel actively affects the suspension, keeping passengers safe as they ride 20-plus tons of metal down the road.

Every inspection builds upon the knowledge she developed working on her own vehicles as a teen, watching and listening to mechanics at shops where she grew up working as a detailer, and throughout her life. “When you grow up in the rural country, you work on what’s available,” Abbott said, “and what’s cheap is cars that need a little work.”

“People expect things to just work,” she added. “But figuring out and learning about how they work, why they work the way that they do – that’s fun, and it keeps things interesting.”

Emily Grace Abbott was assigned male at birth in Tennessee, lived briefly in Texas as a child and was raised in rural North Carolina, on a 32-acre farm. She recalls raising animals, roaming the land and, for a birthday, renting a Nintendo 64 game console from Blockbuster Video. “You went outside; you did stuff,” she said. Abbott grew up appreciating what she had and possessing a strong work ethic and sense of personal responsibility.

Starting around 8 or 10 years old, Abbott realized something about herself was different, although she didn’t have a word for it. The conservative Christian community in which she was raised “didn’t speak about being trans. Being gay was bad enough,” she said.

Abbott first thought about leaving town at 16 – and after getting accepted to quite a few schools, meandered for a year after graduation and enrolled in the U.S. Air Force at 18. Military service enabled Abbott to grow confidence and fed a love of traveling that began as a teenager, when she began taking road trips. While in the Air Force, Abbott said, “I thrived in that environment of rigid structure and knowing what the day’s going to hold, but what fills in that day is totally unknown.” In the military, she added, “You kind of lose your sense of home. But you can make it wherever you are.”

Abbott came out as a transgender woman after concluding her military service and moving to Colorado with a desire to explore a new region – and not knowing anyone in the state. After working briefly in Estes Park and teaching preschool in Longmont, she applied to work as a bus operator for RTD, having never driven a vehicle that big. “I will try anything once,” she said.

That includes unexpected road trips. In the span of two weeks, Abbott spent a week in North Carolina and drove back to Denver in a day, worked four days, then joined a friend on a flight to San Jose, California, to drive a car back to Colorado. She saw both coasts during that time frame.

“I did something that most people will never do, or have even ever thought to do,” Abbott said of this trip. “It’s an experience that is mine. And my story is mine.”

“Ownership of your own story is important to me: Am I comfortable here? Is this long term? Do I want to change it up? Being trans helped me to learn that there is no stability in life. You can write your story however you want.”

If she won the lottery – which she plays only when it exceeds $1 billion, even then buying just a few tickets – Abbott said she would take road trips the rest of her life, going everywhere and staying as long as she wants. Discovering the Mini community has enabled her to see a lot of the country, but typically for a day or two at a time.

Behold life in a Mini: Retracting the sunroof enables Abbott to breathe fresh air during a snowstorm. With the windows down, a vaguely reminiscent smell near Lake City brings her back to the honeysuckle vines lining her childhood driveway. Big elevation changes, road gradients and banking within the curves – these feel like roller coasters in a small hatchback that handles like a go-kart. She finds hilarity in the dichotomy of driving both a lightweight subcompact car and a bus.

And if a lunar eclipse beckons, Abbott will drive several hours to stand in rural quiet and watch the event in its entirety. “It’s not a once-in-a-lifetime thing, but it’s the one time I’ll get to see that particular one,” she said. “I could have done the safe thing and gone home. But I would have missed that moon, and time and connection with friends.” Such experiences – and learning something new – make her happiest.

“I don’t think of life as a choose-your-own-adventure book, because you can’t go back and restart,” Abbott said. “You make your choices; you live with them. You’re always moving forward. But you can choose what comes next.

“None of us is guaranteed the next second, let alone the next year or the next decade. So you plan for the future, but you don’t forget to live in the present.” 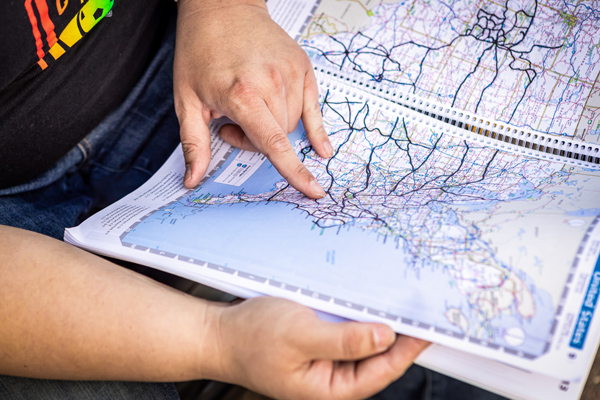 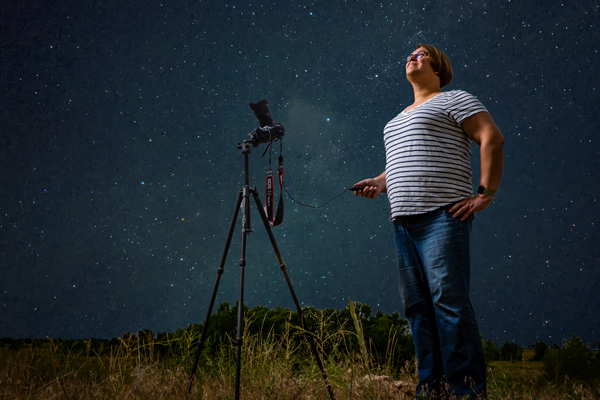 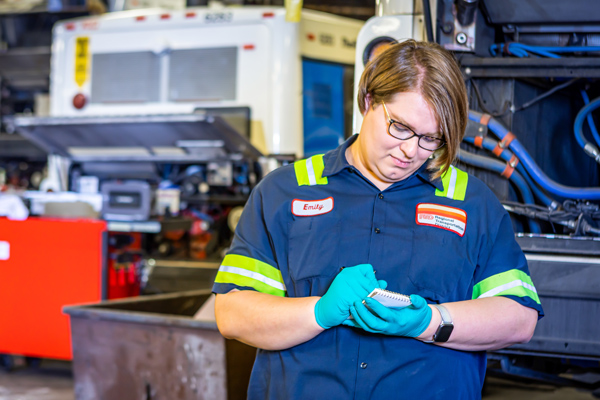