When Marya Walker watches Denver fly by from the light rail operator’s cab, she’s thankful to be a part of something big and to be making a positive impact that drives the close community bonds she has formed. 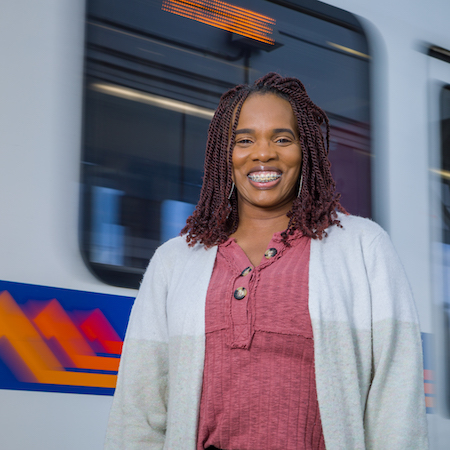 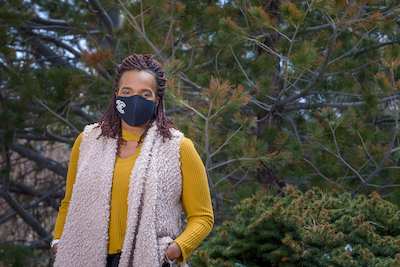 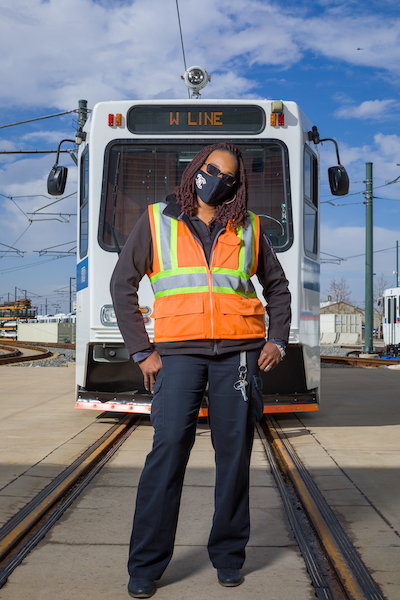 From the cab of a light rail train, ‘you’re just soaring’

From the operator cab of a light rail train, life passes at both rapid and incremental speeds. Ever-present are the stations, the signals, the maintenance of way employees dispatched to fix a track issue. Subtle changes include the colors of the landscape with each season, the newly installed artwork, the office buildings and homes that rise further from the ground with each new run.

This is the awe-inspiring view that RTD operator Marya Walker has beheld since 2016, when she decided to step away from driving casino-bound buses for something that was literally and figuratively bigger. There’s an adrenaline rush from operating a light rail train, she tells you, as it flies down the tracks with the scenery of life laid out ahead. Walker has had a lifelong fascination with big vehicles – she considered driving 18-wheelers – and says that operating them is thrilling.

Generally speaking, she said, “You don’t have anyone in front of you or on the side of you. You’re just soaring, you’re just going down the track, looking at everything.”

The wide-open spaces Walker now sees are a sharp contrast to those of her childhood, when the New York native traversed her dense, urban neighborhood in the Bronx on foot, by bike or, on occasion, on the New York City Subway – the largest transit system in the United States. It was nothing for her to jump on a train to go see family living in another borough, traveling from Manhattan to Brooklyn, or from Brooklyn to Queens. As a teenager, when she went to live with her maternal grandmother in Brooklyn, Walker was on the train every day to get to school in downtown Manhattan, or to see her father in Spanish Harlem.

Being so used to this transit system, Walker said, she was struck when she traveled outside of New York and saw how different other people’s environments were. She moved to Colorado in her 20s on the suggestion of a friend, who told her that the state was “beautiful, and not cold.”

“You visit other states and it’s like, how do they get around out here?” Walker said wryly. “Everything there (in New York) was just so fast-paced. You just go, go, go, go, go. You don’t slow down for anything. Coming out here, it was like, all right! I’m just living in the country, aren’t I?”

Now 45, Walker is quick to add: “I love it out here. I love that it’s not so fast, and I love that I can slow down a little bit.” When she returns East to visit family, she said, “after two days, I’m ready to come home.”

Walker relishes the outdoors and loves her quiet neighborhood in Aurora, where she has covered her corner lot with planter boxes of petunias, pansies, tiger lilies, marigolds and zinnias. Gardening brings a beauty and order that she loves – and calls to mind the countless hours she worked in her granny’s backyard in Brooklyn as a child.

Walker continues to be influenced by the now-83-year-old matriarch and grew up around people her grandma’s age, “so older people take to me.” Most of her friends in Colorado are elderly, Walker notes, and she loves that. “Those are the best people I have,” she said. “They have their head on right. There’s no foolishness.”

Walker acknowledges that she leaves an impression on people. An older man calls her “princess” every time he sees her. Customers riding in wheelchairs smile upon seeing her approach, recalling her kindness on prior trips. One woman, a casino bus passenger from many years before, recognized Walker immediately upon boarding her train and shouted, “Hey, New York!”

Another woman had lost everything she had, Walker said, although she didn’t know that until later. “She had no money to get home, and I thought, you know, I’m going that way anyway, back to the garage,” she said. “I told her, I can just drop you off, and she had to walk a block or so away. And the next time I saw her, she told me that she couldn’t believe there were still good people in the world. To this day, we still talk.”

“You just have to be kind to people,” Walker added. “You never know what people are going through.”

Her work never feels repetitive, she said, because something happens on every trip. And while she often operates trains on different lines, she favors the length, varying speeds and dynamic of the R Line, which extends from Aurora to Lone Tree. “It’s an hourlong trip,” Walker said, “but it doesn’t feel like it.”

Throughout the pandemic, Walker has spoken with her passengers about their reliance on transit – how so many people continue to work at essential jobs, and how they don’t have their own vehicles. She said she has been thanked by customers who have told her, “We need you to be here to get around.”

Operating a light rail train has led Walker to open up more to others. It constantly affirms the importance of courtesy and customer service. It has demonstrated the respect others hold for her work when they call her “ma’am” – or, in one case, “a sweet soul.”

It has shown Walker that the Denver region is, in fact, very different than her community of origin. “It’s a pretty good region,” she said, then corrected herself: “No, it’s a great one.” 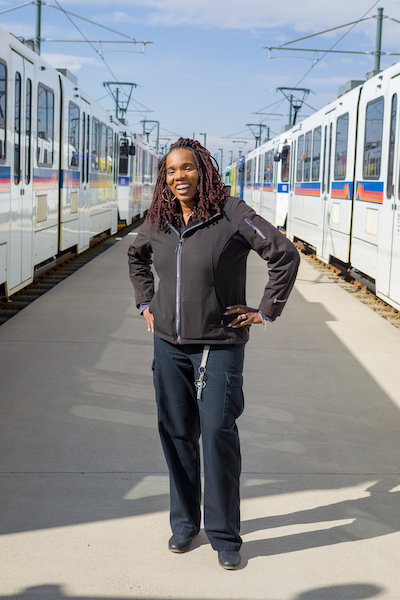 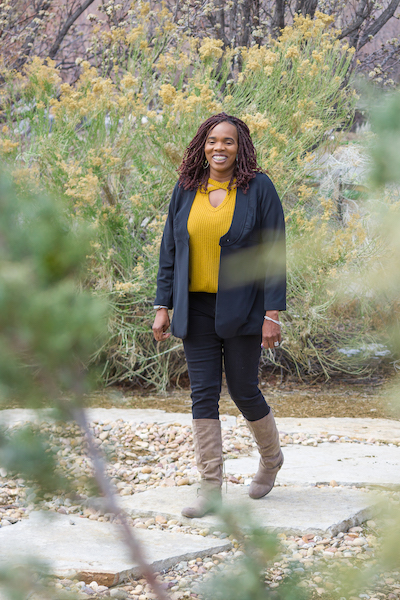