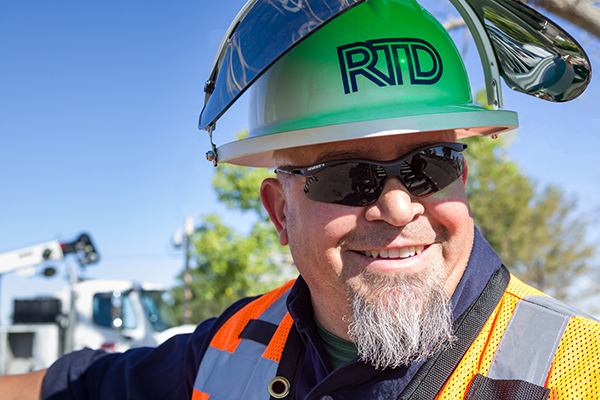 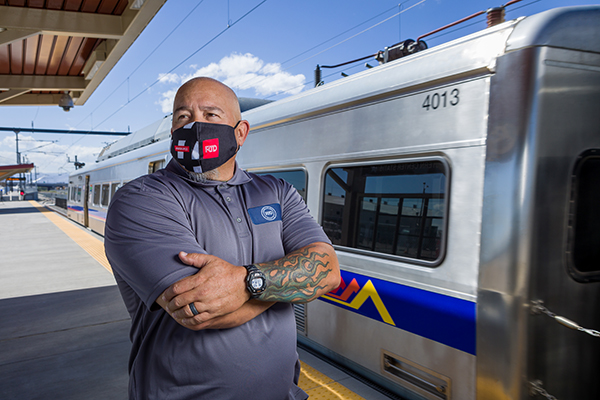 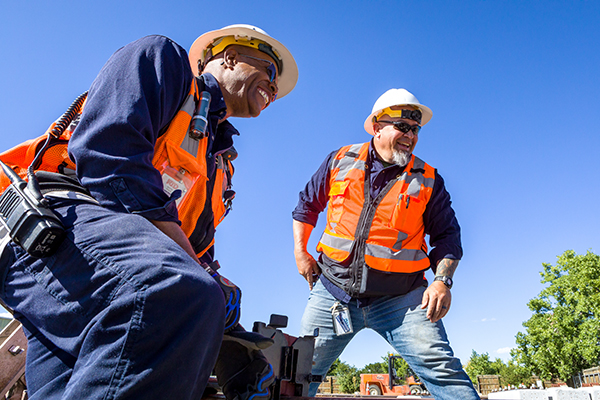 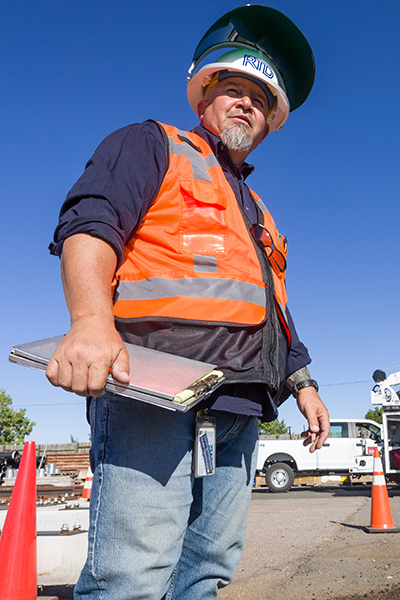 ‘We are the backbone’

To know Rafael Gutierrez is to know the wisdom, skills and life lessons imparted by dozens of people over his decades-long career in railroading. Studying a 26-year-old photo of the first team he ever had, Gutierrez looks at each face and delivers his recollections in a staccato rhythm.

There’s Soul Man, who taught him about surfacing track, how to read charts, how to cross level, how to make curves. Oscar Felix, David Gonzalez and John Pimentel explained the logistics of the tracks, how to use a computer, move cars around, whom to call, what to do. The late Gary Milner, the blue-eyed chief, taught him integrity. Kenny O’Neal, now retired, along with Sean Kearns, built control points and new tracks and demolished tunnels. There’s Lee Tavares and Lou Adler, who taught him welds. Track inspector Mark Suarez, now an assistant roadmaster for BNSF Railway in Texas. Steve Silva. Rodriguez. Johnny. Mike. And Allen Lake, who “beat the hell out of me ’cause he liked me,” said Gutierrez, who likens the teamwork he encounters in the railroads to that which he knew in the Marine Corps. Gutierrez recalls the staff sergeant there who saw potential in him – the first time anyone had displayed such interest while he was a young adult.

The photo captures friends Gutierrez hasn’t seen in years. He keeps it close at hand, near a clipboard given to him by a conductor in Victorville, California, the day he retired after 30-plus years of service. “It’s beat up, it’s a little tore up, but I haven’t got rid of it,” Gutierrez said. “I have the friends that I have. And I am fortunate.”

At RTD, Gutierrez is senior instructor and track supervisor for the agency’s newest commuter rail line, the N Line, which opened last September. Gutierrez and the team of 16 he supervises are responsible for maintaining 22.6 miles of track, including the 13-plus miles of the N Line, to Federal Railroad Administration standards.

“I build railroad. I maintain railroad. I train individuals that want to learn,” Gutierrez said. “This is what we do for a living. I respect their craft.” He jokes that while he may be ornery, “we have one of the best relationships as a work group because of what we’ve experienced in the past. I tell the guys that we are the backbone.”

Gutierrez followed family to Colorado from Southern California, where he worked for 13 years as a contractor for that region’s commuter rail system, Metrolink. Having helped maintain a system that included several hundred miles of rail over seven territories, Gutierrez said, “it’s so laid back here, I’m not used to it. I’m used to running 100 mph. Here, you can catch your breath.” He now has time to develop a training program for his team, to be out in the yard to show them thermite welds, torch cuts, how to work with heavy equipment.

Gutierrez notes that every lesson he teaches is one that he learned. “I’ll never tell somebody to do something first that I haven’t done,” he said. “You can’t teach behind the desk.”

Gutierrez continued: “I know the strength of every guy on my team. I know what they can do, what they are capable of and what they cannot do.” Their work, he said, “is a team effort. That’s why I don’t want to talk about myself. It’s the people around you who make you look good. It’s not the person in front.”

Gutierrez joined the Atchison, Topeka and Santa Fe Railway (ATSF) – which later became BNSF Railway – in 1992 as an assistant welder and welder helper, putting to use the skills he learned in the military. Welding for railroads differs from the tasks he completed with the Marine Corps or in a regular welding shop, Gutierrez said. Here, welders build up frogs, also known as the crossing point of two rails, and use thermite welds to merge rails together.

While honing his craft at BNSF, Gutierrez worked closely with a welder named Jimmy Capps, who later became an assistant general manager. He “never looked past the people behind him,” he said. “He always saw the potential in others and went out of his way to help them. He helped me out a lot.” When Gutierrez became a training manager during that time, Capps’ son Kevin called Gutierrez in the middle of the night while doing rail track maintenance, speaking to something he didn’t understand.

“I’m like, where you at?” Gutierrez recalled, telling Kevin, “I’m right down the street. Come to my house. I’ll have coffee for you.” Both men met at odd hours for a couple weeks, and Kevin asked Gutierrez why he was willing to do it. “Because your dad did the same thing for me,” Gutierrez told him.

While numbers stick in his head, Gutierrez keeps detailed notes for everything he needs to recall at a moment’s notice. The worn notebook shares space in his bag with another item Gutierrez has carried for more than 20 years: a collection of letters, poems and memories from his eight children, who range from 15 to 32.

For several months during his first year with RTD – well before the N Line was in service – Gutierrez walked the tracks multiple times, noting dimensions and measurements for switches. It was his first time dealing with overhead electricity. He asked questions about plates, alignment and structure and dug into literature to understand the basics. Is any of this intimidating? “Only if you let it be.”

The nature of his work requires Gutierrez to “see everything from the ground up, from the drainage dirt, to the ballast, to the ties, the plates, the rail, the clips,” he said. “In my head, I’ve got most of it photographed.” Surface observations – like a dip, the approach, mud – can reveal deeper problems. Gutierrez learned that lesson on his very first project at ATSF, when he proposed a repair that would fix only the obvious problem. He recalls his colleagues telling him: “Look, youngster, we’ve been here long enough to know that we’re going to come back out. So, we can do it your way, and we can come back and do it again and get yelled at, or we can do it the way we’re supposed to do it.”

In California, Gutierrez fixed track as fire jumped above his head and while waist-deep in water amid flash flooding. The blizzard we all experienced earlier this year was his first – and he was out in it with his crew, assessing freezing switches as the wind howled, visibility worsened, and the crew struggled to blow snow from the tracks. In that instance, RTD ultimately halted train activity due to safety concerns.

Gutierrez acknowledges that most people don’t know about or understand the work that his team does every day, seven days a week, regardless of the weather. The public doesn’t think about how the team walks the track looking for misalignments, to ensure passenger safety. They don’t know that his people are picking up trash and broken glass and cleaning up stations. “As long as everything is running, they don’t want to know about us,” he said. “But we’re the ones in the background.”

Gutierrez speaks with pride about every member of his family and their adventures: hiking, fishing, camping, gardening, time with his grandchildren. He says he could not do this work without the support of his wife, Judith Inez, who “has put up with the long hours, of going from days and nights.” And he quickly notes the other group he is most proud of: his team. “If the guys call in the middle of the night, I answer,” he said. Does this happen often? “Enough. But it’s a good thing – I like that. You have to. I care about the guys. The guys are the ones who help me the most.” 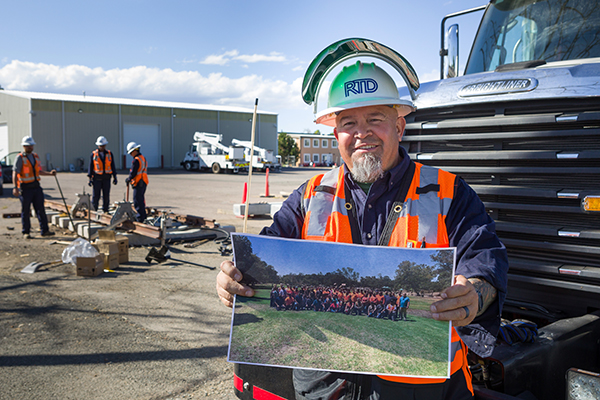 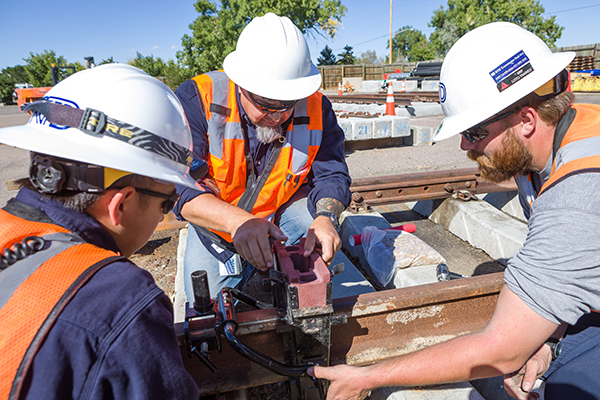