“ TRANSIT SAFETY IS ABOUT TRAINING.”

Inspired to keep employees and customers out of harm’s way for more than 30 years, Senior Manager of Safety, Security and Compliance Martha Bembry is always refining the rules of transit safety. 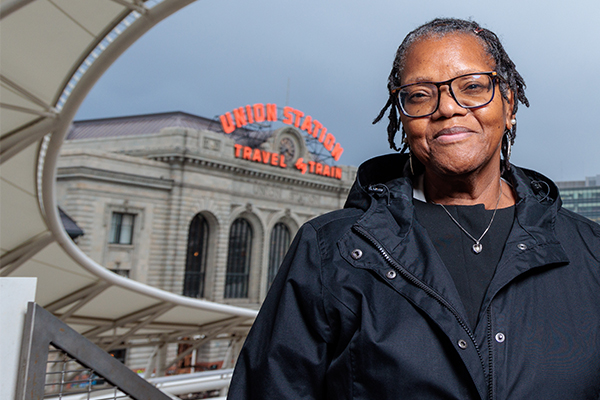 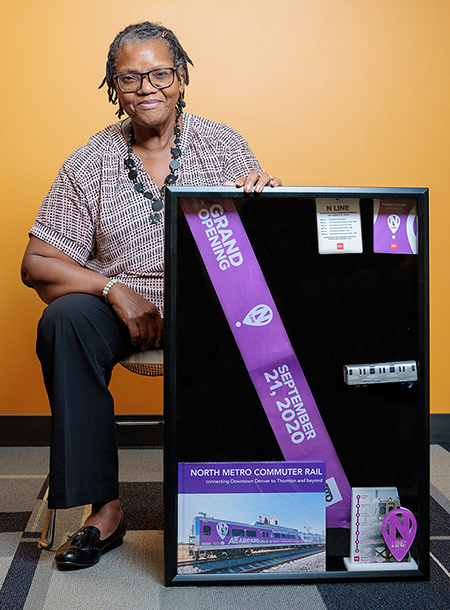 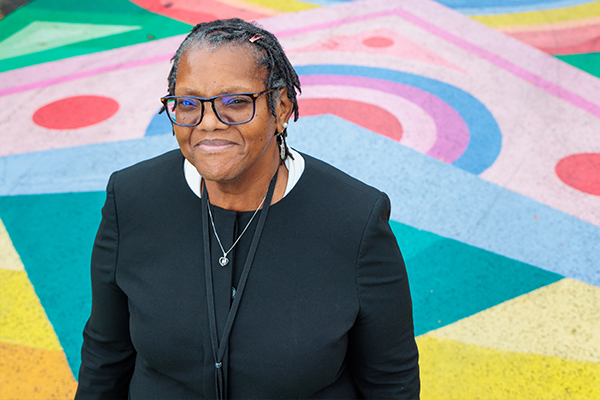 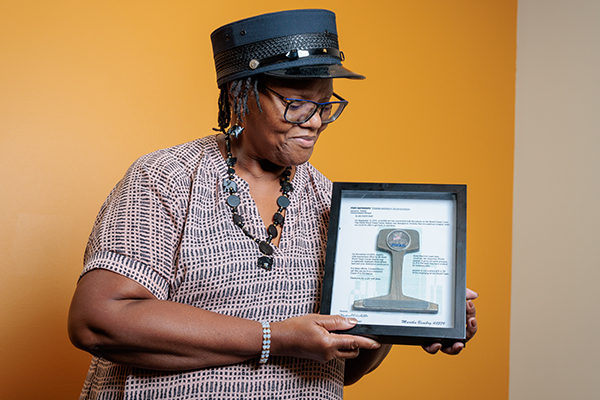 ‘What your mind can conceive, your body can achieve’

Martha Bembry had been awake for several hours when the sun rose over Jersey City, its rays illuminating the volunteers, vendors and police officers preparing for the Port Authority Trans-Hudson Corporation (PATH)’s annual safety fair at Journal Square. On that bright Tuesday morning 21 years ago, Bembry watched as safety glasses, vests and flashlights were laid out on tables for PATH employees alongside information on various safety topics. She accepted food deliveries for participants. At some point that morning, she would need to cross the Hudson River to pick up T-shirts from a World Trade Center storeroom, delivered there by mistake.

Activity was picking up, and Bembry – who was overseeing the event – worried she wouldn’t make it to Manhattan on time. Shortly after 7 a.m., a storeroom supervisor told her he would have someone deliver the shirts.

Just after 8:46 a.m., Bembry’s police officer colleagues stopped setting up a Jaws of Life demonstration and ran from the event. Her boss, striding through the lobby, told Bembry that a plane had hit the World Trade Center. Bembry and her colleagues headed for the roof to get a better view.

“And when we got up there, we saw one of the towers collapse,” recalled Bembry, then a safety specialist for PATH. “I was in shock. I knew there were people who worked in that building. I didn’t know what may have become of them. I called off the fair. I told everyone who was there to go home. And I started distributing the food to the departments that I knew were going to be there all night.”

Bembry’s family initially thought the worst during the events of Sept. 11, 2001, because they couldn’t reach her. She couldn’t go home. Her husband was out of town on business at the time. At some point, Bembry was able to reach her sister, who picked her children up from school and sat with them. Bembry arrived home in the middle of the night.

In the days that followed, Bembry drove to work on an empty stretch of I-95 in New Jersey, with state police waving her through once they knew she was an essential worker. A rescue operation had been set up at Exchange Place, just south of the former World Trade Center site, and Bembry helped colleagues who took part in this work and volunteered to venture into PATH’s tunnels beneath the river between New York and New Jersey. She set up gas monitors that would alert engineers to danger. Crews were gone five minutes before they had to abort the operation from the New Jersey side.

“That was an experience,” Bembry said, reflecting on that period. “It was a long time before I could talk about it.” The way she looked at work, how she viewed her life, she said, “it changed.”

Bembry – now RTD’s senior manager of safety, security and compliance – moved a few years afterward to Colorado, where her husband had been working as an engineering consultant. All four of their children were in college or adults. She decided to see what other avenues for work were open, doing safety training on her own for a few years. When a safety position opened up at RTD in 2007, she applied. Bembry was first assigned to Bus Operations, where she designed a database to track accidents on a monthly basis. Having worked with trains in New Jersey, Bembry had to learn and adjust to a different set of federal regulations pertaining to buses.

When she learned that RTD would be opening the then-University of Colorado A Line, B Line and G Line as commuter rail operations, Bembry was excited. She applied for and was placed in a role focused on ensuring that the contractor complied with safety-related Federal Railroad Administration regulations. Bembry develops safety programs for RTD’s rail operations that meet FRA and RTD expectations. She investigates accidents and incidents, including deaths, that occur along RTD’s rail lines. As a consequence of her experience, Bembry takes safety seriously.

“When people complain about the noise of the train horn, and of the bells that are at the platforms and stations, I don't understand,” she said. “The reason why the bells ring and the lights flash is to warn the public that a train is coming. We have to have all these warnings along our right of way.”

Bembry gets upset if, during a fire safety drill, employees ignore the sounds they hear and keep talking on their phones. That's how people lost their lives on Sept. 11, she said. “They ignored the fire alarm because they didn't know what was going on, and they waited until it was too late to leave the building – and they got caught and killed. That's why it's important to make sure that you have these emergency procedures in place and that your employees know what to do, so that they can help themselves in any type of situation.”

Safety has been of interest to Bembry for more than three decades, since she began working for PATH while in her 30s. She started out directing rush-hour customers as a station agent. From there, she put in to be a train conductor and got that job – making her the Port Authority’s third female in that position. She was also one of only three African American engineers or conductors at that time. The other two “had been doing it for a few years prior to me and kept me encouraged,” Bembry said. “It was a tough job. If someone spits on you or calls you the most horrible names, you have to maintain your composure because you're representing the organization.

“It takes a special person to be out there in the forefront and keep that smile on their face despite what's thrown at them. I have a lot of respect for operators in a transit system because I was one myself.”

Having earned a degree in industrial engineering, Bembry knew that working as a conductor would help her understand how machines and people work together, better enabling resolution of safety concerns. When the opportunity arose, she applied to be a safety specialist with PATH. Bembry earned the respect of her colleagues by seeing issues from their perspective and advocating for them.

When engineers complained that the non-ergonomic wooden seats they had to sit on often dropped in place – leading to back pain – Bembry wrote a paper convincing the management department to refurbish all of the trains with better seats. After her Maintenance of Way colleagues complained that the tunnels they worked in filled with diesel fumes, Bembry used a meter to take readings and argue that PATH should use ventilation fans – already in place to remove smoke in case of emergency – to remove these carcinogens from the space. Able to work in a healthier environment, the team gave Bembry a “tunnel rat” T-shirt – an item she remains proud to have, given “they didn't hand those out very often, not for anyone outside of their group,” she said.

Bembry was born in Newark, New Jersey, during the Civil Rights era. Her family was from Alabama, and when she went there to visit her grandparents, she recalls certain places her family couldn't go because they weren’t welcome. “You can't change how you look, and so you just have to accept it,” she said. She recalls being aware of “having to stay where you are, and not being allowed to go any further.”

Thinking about her career achievements, Bembry said, “I never would have thought that I would make it to the level that I am now, because I didn't think it would be accepted. I have been successful, and I acknowledge that. But in some instances, it wasn't acknowledged.”

Studying industrial engineering at Newark College of Engineering – now New Jersey Institute of Technology – “was hard,” Bembry said. While Newark is a predominantly African American city, no one in the college looked like her. “My professor told me I didn't belong. The people around me told me I didn't belong. And when you get that constant put down that you'll never make it, you’ll never get anywhere, it's hard. But I did finish.” Bembry did so while tending to her young children, sometimes bringing them to class. “I persevered, and I graduated,” she said. “I can honestly say I earned that degree.”

Bembry has taught her children “to not allow people’s negativity to affect you mentally. That's what I've learned over the years.” She is proud of all three of her daughters and her son.

Bembry began her career in transit after hearing her husband, a fellow transit employee, talk about his experiences with trains and tunnels. “I thought it would be interesting, and once I got into it, I loved it,” she said. “A large part of transit is training, and I felt that knowledge is key. If you know what can harm you, then you make the decision to best protect yourself.”

When she retires next spring, Bembry looks forward to spending more time talking with people about the experience of being a Jehovah’s Witness. She credits God and the Bible for keeping her mentally and physically centered.

“Don't give up,” Bembry believes. “Don't let anyone put you down for how you look, or maybe how you speak.

“What your mind can conceive, your body can achieve.” 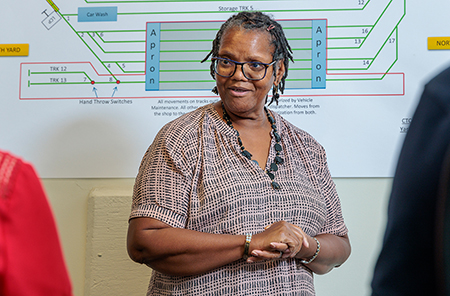 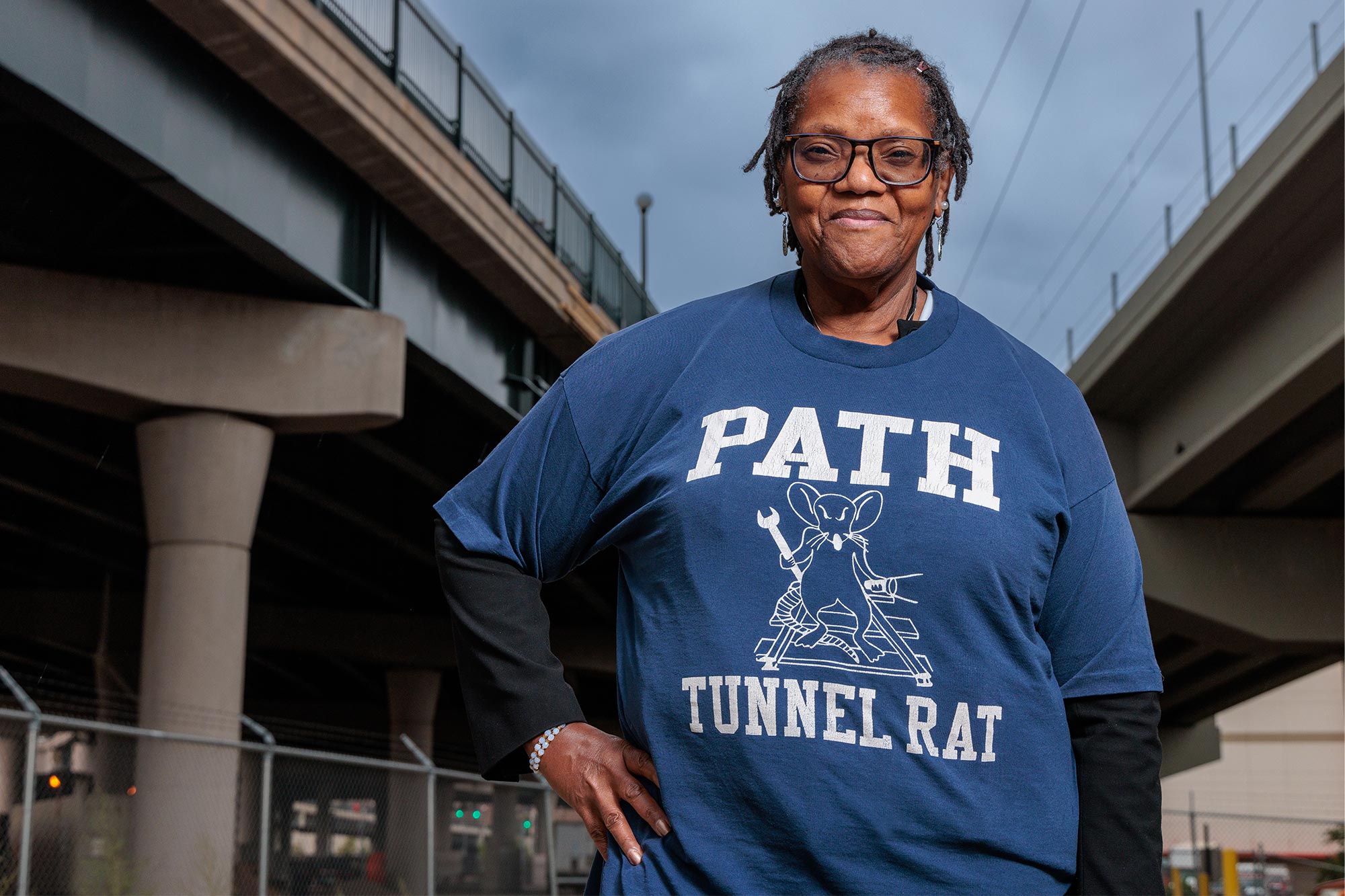 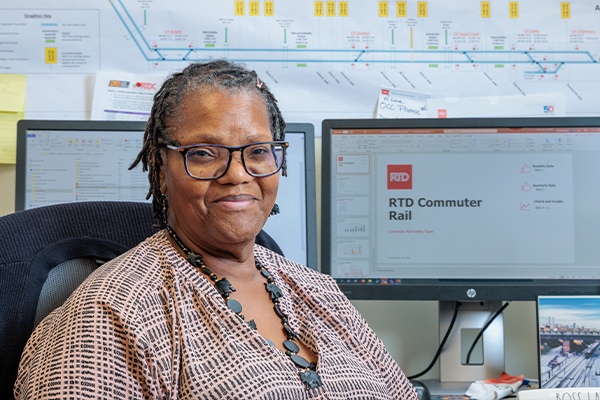